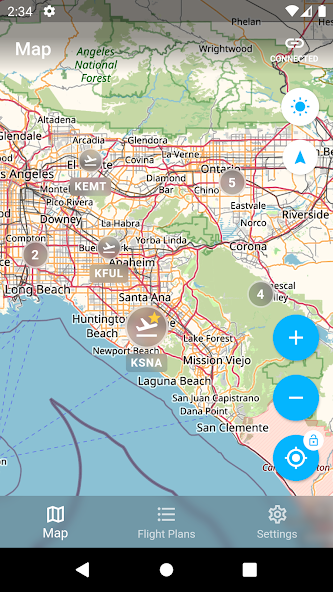 With this lightweight app you can see your current plane position and teleport anywhere in the world while flying. Easy to use flight planner which features 8209 airports all over the world allows you to plan your flights and follow a route in dedicated GPS like navigation mode.

Features include:
– high resolution map with easy on eyes dark style,
– automatically updated plane position with a tail of flown route,
– teleport with a custom altitude (long press the desired place),
– easy to use flight planner with GPS like navigation mode,
– custom waypoints.

All that and more for free, forever.

It uses the SimConnect API so a tiny app running alongside the simulator is required for transmitting real time data.
It can be downloaded from www.fspilot.app

If you like the app, let others know by the review. Thanks!

Does exactly what it says on the box. I've tried several of these programs but this one is most definitely the best. Just install it and run it. Easiest to use and works really, really well.

It worked as described but my dns ip address got changed around how to prevent that? Edit what last tab ? What is that. Edit again I meant on my pc after I used the app the ip got changed and experienced really slow internet it has to do with dns ethernet
----------
on "Local Server" just type the IP address shown in the server app on the PC and you should be good to go

Awesome addition for immersion to the game. Is there a chance flight duration could be added so we can see how much longer our flights will be?

Really good app! Its useful for me cuz i like to have a peace of mind knowing im going somewhere at some point. Its also easy to use!
----------
Thanks!

It used to work with fsx before i think. i tried now but no joy :(

Does it support older android systems? Not working myside on samsung tab 3

Great app to use for additional navigation and flight planning. It works well with Samsung DEX on a second screen or as is on the device installed. Uses Open Maps in light or dark mode. I really like the flight path recording in real time and the flight path planning is a great way to discover landmarks without using the MSFS in game markers. I wish it had options for different maps with real world intersects, flight paths & patterns but nonetheless it's a great tool for the price!
----------
Thank you!

I like this app so far but my only question is why don't the uncontrolled airports have an option for a destination or take off? As I live in Junction City Kansas 3 JC and that was not an option for me to select as a departure airport
----------
I only support airports with an official IATA code and within its database. I'll add a possibility of custom airports addition in the future though :)

Overall it's a great app. Minus 1 star because the in game track differs to the in app track by about 20 degrees. This might be magnetic vs true? No idea. A few things that would be nice to be included would be satellite basemap, and the ability to navigate straight to a waypoint. Cheers!
----------
Hi, thanks for the review. I added your requests onto my planned list! :) The 20 degrees track difference is weird indeed, it's fine at my end... I'll try to replicate it. Cheers :)

Cool concept, but would you be able to implement it for the series x|s version? I think it would be awesome to have for Xbox! (Edit) That's unfortunate! That would be awesome to have!
----------
Hi Colton. Implementation for the Xbox consoles is not possible due to lack of the communication layer (sim connect). Xbox is a closed platform for external TCP connections, unfortunately...

***edit (04/17/2021)*** was surprised/impressed that the Dev literally fixed the mentioned issue less then 2 days after, so thank you! Excellent app! *** really great love it! just one thing, it would probably be a good idea to add a confirmation dialog before deleting a route (I accidently deleted a route pretty easily and it all happened so fast 😢)
----------
Hi Jared, thanks! I'll target your idea and release an update ASAP.