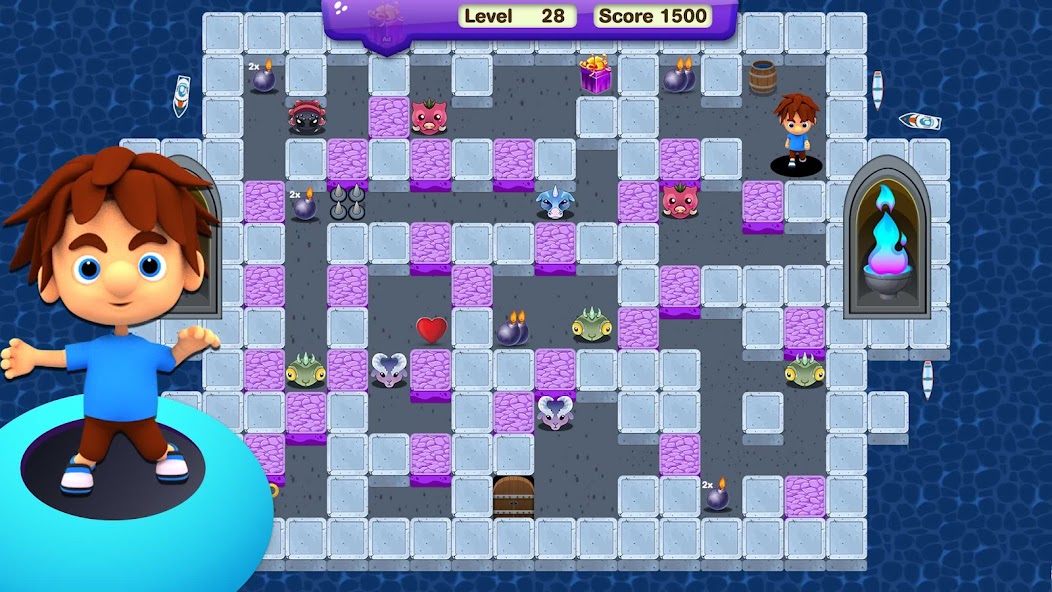 Hidden tiles issue resolved in some levels
Level 35 issue resolved.
50 levels included.
Redesigned levels till level 28.
Difficulty of some levels decreased according to user feedback.
Enjoy and talk to us through feedback.
Bomber Warrior Reloaded - Bomb Blast Strike, is a well-crafted bomb blaster game with an intuitive UI that spans multiple challenges for an evocative experience.

Bomber Warriors – Bomb Blast Strike, is a well-crafted bomb buster game with an intuitive and simplistic User Interface that spans multiple challenges for an evocative experience.

Strategically place the bomb to blast away your enemy, get the key and make way to the door, and be the last one to stand out! The craze of exploring the hidden key and making new strategies to blast the enemies in bomb blast strike will never make you feel like a slogging chore. The interactive game dialogues and power-ups will help you in reaching more entertaining levels of Bomber Warriors and scoring high. The addictive bomb blast gameplay is suitable to play for people of all ages and is compatible with both smartphones and tablet devices. It works pretty well without the internet connection to kill the boredom.


How to Play the game?
Simply follow the tutorial and it’s all easy to play, but where there is strategy, you have to use your mind for passing out the level to reach the next one.

> A Virtual Pad is placed on the left bottom corner that allows the player to control the movement of the Bomber Warrior Character.

> Next, strategically drop the explosive bombs to blow away your enemy and find the key to unlock the door. This will lead you to the next level of the game.

> In order to create some thrill & difficulty for getting a win, 2 types of blocks are placed on the main screen. Some blocks are easily destructible using bombs, while some are indestructible.

> Besides the charm of reaching new levels, tile blasting and eliminating the enemies will make your score higher every single time.

> Be aware of the well-known enemies with powerful abilities if you fail to blast them first.

> Some power-ups like Bomb Range, Double Bomb, Shield, Speed, Lives, and Key are added throughout the game. Find them out and make your chances of getting a win more obvious.

> Once you get killed by the enemy, you will have to start the level again.

So, get your thumbs and mind ready to enter this beautiful world. The nature of the gameplay and its craze to pass out the levels by fighting the enemies will surely make you addicted to the game.

Hit the comment section if you like this adventure-filled game or you can send your suggestions which we really appreciate.