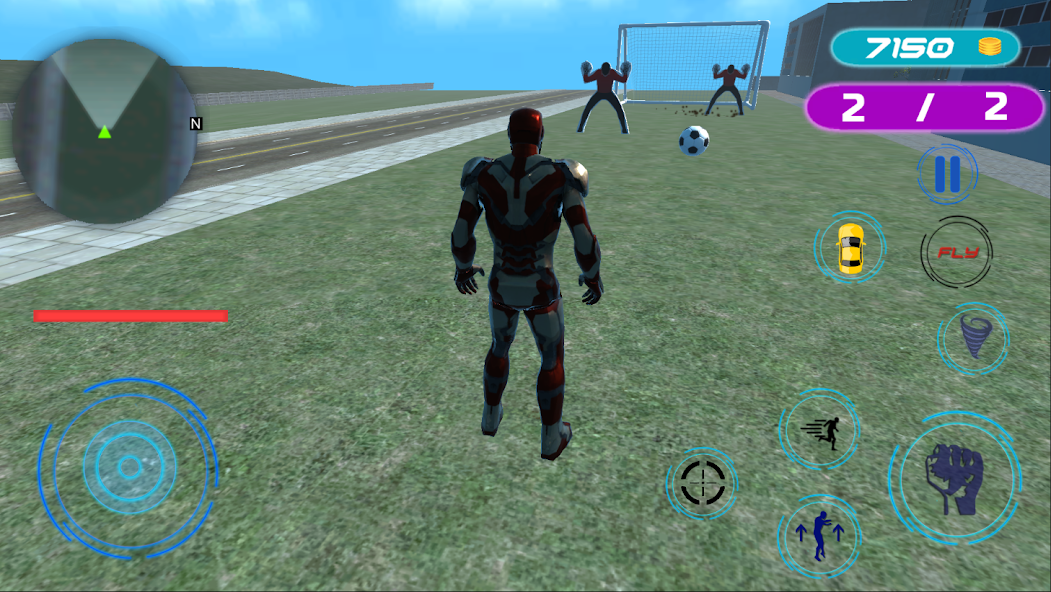 Play as a Flying Superhero in a open world game, use special powers to fight and save City or turn into a Bigger Player to challenge yourself against Stronger and Bigger Bosses. Become the best Iron Hero Man there is.

The gameplay contains everything for everybody. You can collect cash in Bonus Levels. You can switch from player to car mode. There are special missions designed only for car mode. In these missions, you can, for example, race against fast police cars to collect certain items within a specific time limit. Car mode reveals new powers for you to choose and fire from. Become a gangster in grand auto or a transformer, all of it depends on you.

The game also features levels with sports. You need to play football and score goals to complete these levels.

Completing each level awards you with cash points. You can use the cash points to purchase better, stronger, agile, and reliant players with enhanced supercars in different colors. Each new player has higher stamina and health than the previous. The more expensive player, the more abilities they have. For example, the default player you start the game with can only shoot a tornado to fight against the challenging enemies. The first purchased player can use special powers such as call a short-scale earth quake and the second purchased player can fire bullets at will on top of tornados and cause earthquakes.

Other than one-on-one action or combat levels, you get to jump through the lava to collect briefcases. You need to use the wooden support available to jump on, however, only one side will hold the player. Sometimes, there is zig-zag maneuver, sometimes, you need to follow a straighter path to be able to avoid getting falling into the lava and restart the whole level from the beginning.

Iron man avenger is amazing app 👍 i really like it. Must try it

This is the best Avenger Iron Man out there, Best graphics too

one of the best iron avenger game must install
----------
Thank you. We are happy to know you like it. Please do check out our other games.

This is the Best IronMan Game ever, I like how he is the best Avenger. This is the best Grand Theft Auto game . With no money spent I liked how adventurous it is
----------
Thanks so much for the awesome review. Please tell your friends about the game and what they are missing out on :)

Very good game.
----------
We are truly happy that you enjoyed our game. Thank you so much for your evaluation. Your praise will help us to create more interesting games.

I like how Ironman plays and meets beautiful girls.
----------
Thanks so much for the awesome review. Please tell your friends about the game and what they are missing out on :)

"this is the closest game to Ironman on Play Store, the flying power of Ironman is just like in the Avengers Movie, I'll recommend you to download"... Yippee 😊😁
----------
Thank you. We are happy to know you like it. Please do check out our other games.

Best iron man game, my kids loved it and are always playing it

Great game! Love it Just keep up with updates
----------
Thanks so much for the awesome review. Please tell your friends about the game and what they are missing out on :)

Best iron man game, graphics are cool, runs pretty good on my phone. The flying feature is really good and liked the cars too
----------
Thank you for your feedback. Any suggestions are welcome. :)