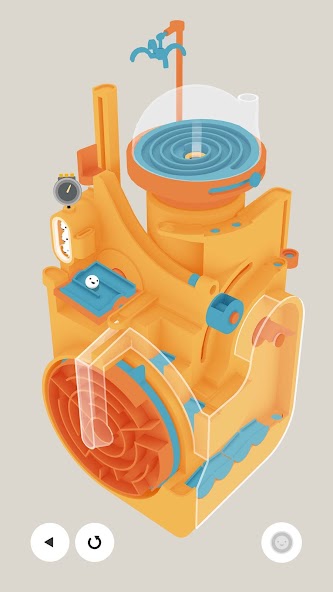 Tap, turn, tilt and spin the contraptions to help each ball hop and roll its way to victory. Each Automatoy is a unique, mechanical obstacle course.

“A joyful collection of contraptions”
Techradar

Very good game, time killer. And the cure of boredom. If you are looking for a game to spend money on, this would be the choice. As I mentioned "spend money" yes there will only be 3 free games and the rest you'll need to pay. However, very nice game.

The UI in the game is so confusing, I completed a couple levels except when I completed the red level or whatever it is and nothing happened. I tried to go to another level but everything I tried didn't work, I then completed the level again and there were three stars at the top but other then that, nothing. I'm basically softlocked at this point and I can't do anything anymore because the UI is too confusing for me to try and figure it out

Truly enjoyed the first 3 puzzles, little difficult to get 3*, as you need to consider timings. Which makes it pleasantly difficult. However in order to play any other puzzle after 3, you need to pay to unlock the entire game. This is purely a demo! If they were upfront that it was going to cost me $5 I probably would have paid it, but because they "tricked" me into believing it was a full game I can't support that. Either offer ads, make progession reliant on 3*, or be upfront about cost.

Awesome game, good graphics nice puzzles, only downside is the paywall to have access to More than 3 of the puzzles. I actually did consider buying but on further inspection there just wasn't enough levels to justify a purchase, considering it would only amount to a weeks worth of entertainment at most. But if there was more levels I would definitely buy.

This game can NOT be described as "free" in any reasonable terms. Only the tiny intro and the first three Automatoys are available in this download. If you want more than that you'll have to pay £2.49 to unlock them. You CANNOT unlock them by playing. It seens there's only 12 levels as well. Don't get me wrong this game plays great and has a fun art style but due to the limited experience and duplicitous marketing strategy, it's a hard no from me.

Love this game, it's like a cross between pinball and Monument Valley with its isometric maps. Very easy to pick up, the maps are nicely pastel, the mechanics are brilliant, and the controls are intuitive. Hopefully you can add more replayability and challenge to the maps so there's motivation to come back to the levels, like a new route when you flip the map to the other side.

Sadly it looks more like a demo. You have to pay another 3€ for I think 9 more levels.way to much for 9 levels. Design is great and gfx fantastic. But too expensive for little gameplay

I played 2 levels and this game is the best game I played FOR MONTHS. I love the design, the music, the graphics, the dynamic, even the tutorial is fun and intuitive. Thank you for making the game and I hope you get more popular!

A simple yet complex highly addictive marble challenge game. It's flat yet bright color palette is extremely beautiful to look at combined with all smooth animation of all the parts. There is only a singular control and it work well within the game, making a fun balance act to reach the goal. The only criticism I would have is the needs to be more, whether it's levels or extra challenges, it doesn't matter, it is highly addicting, and I do crave more. All in all, a excellent game. 10/10
----------
Thanks for this wonderful review Martin!

Review after level one: this is not a game, it's a work of art. The whole machine is intricately designed and making it up the hill is so fun. You have to learn the layout until you master the level and get a low time for 3 stars. Getting to the top is a rush! Edit: after lvl 3 you have to pay to acces the next remaining 9 levels. It would've made sense to unlock them by getting 3 stars in the prior levels. Or even watching ads to unlock them. But I can understand the devs decision.

This is NOT a full game, but a demo. You get to play three levels (15 minutes of gameplay) before you have to pay to unlock the remaining 9. The concept is really nice and the game is easy to understand with pretty graphics. There's just not enough content to justify spending money on it.

This is a very cute a d fun physics and timing based game, but they only let you play the first three levels before you have to pay $2.99 to play the rest of the game. I didn't get any adds in my maybe 10 minutes of having the game, but a paywall is not cool.

A great game for a niche genre. Improvements could be made to help celebrate victories: opt-in millisecond timer, saved playback of top runs, ghost balls from these saved playback. Online optional. The three-star mechanism is a solid casual design that fits well with the game, but having advanced modes would add replayability. I've 3-starred everything, and now I have no way to measure continued success, just what "feels" like a good run. And I have no way to celebrate my past performance.
----------
Hi Charles, thank you for your review and useful feedback - these are great suggestions which we'll take on board

Charming and slightly challenging. Love the simplicity of simply tapping to control everything at once. I bought the full version and the playthrough time felt slightly short (completed in 1-1.5hrs), but I'd still say it's worth it. Really loved the music too, very soothing and each level has its own music. Hope they add more levels soon. I like that they kept the free version free of ads but just the first few levels, that definitely helped push me over the fence and buy the full version.

Very tactile and creative game. Monetization is that you get a few levels free and pay for the rest. Really nice and enjoyable and relaxing. Love the use of haptic feedback too. It feels mechanical and so good

It's a very polished and well designed game. However, after you play the first 3 levels it wants you pay 2.99 to unlock the other 7ish levels. It has potential but locking 90% of the game behind a paywall ruins the whole thing.

Loved the game. I wish there were few more levels to play before the purchase though It's so interesting and addicting. So simple UI and the game itself is an amazing concept. Kudos to the developers.

Incredible representation of simple puzzle idea & Seeing how things are happening on the screen makes me feel like a small child. The puzzles are also sufficiently challenging where Game is too short, but gives one-of-a-kind gaming experience that you'll remember for a long time.

Lovely toylike game, I find the background quite bright and glaring but the aesthetic is really nice. I have encountered an issue where I purchased the Operator Key and reinstalled the app but cannot unlock the later levels anymore. Hope this can be fixed!
----------
Hi Lavender, Thanks for your useful feedback regarding the background. The issue should you had should now be fixed - you might have to tap unlock again and then it should unlock. :)

This game is fantastic. I find the music and design to soothing and it completely relaxes me after a busy day at work. The level of challenge means you always want to keep playing. I struggle to put it down. Getting all the levels for £2.99 seems like a great deal to me!