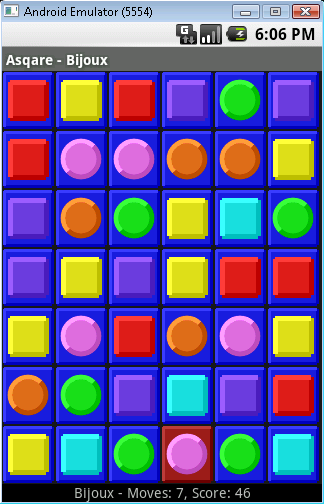 When stuck, make a negative-scoring move! The game offers two game modes and
manages a list of current games that you can pause and recall at any time.

This game was first developed on 2008 for Android 1.0!
It was designed to run efficiently on the limited phone hardware we had back then.
As such, graphics and animations are kept simple. And the good news is that on today’s modern phones, that means a game that is efficient and uses very little graphics and CPU power, thus little battery. Yeah!

New sprites fall from the top, filling the empty space. If they also align to form a sequence with 3 or more similar aligned sprites, they also vanish, forming a chain.

Points are awarded for each sprite removed using a Fibonacci sequence: 1 point for the first sprite, then 2, then 3, then 5, then 8, etc.

In this game mode, there are no levels, and the game never ends as you can never get stuck: you can always swap sprites around. However if the swapped sprite does not result in a sequence removal, there’s a penalty and you loose 10 points on your current score!
That’s pretty significant, so it’s in your best interest to use that only strategically.

In this game mode, the screen is covered with colored circles.
Although this game mode looks visually similar to the previous one, the mechanics and goals are very different.

When a circle is selected, all the adjacent circles of the same color blink, as they are selected too. When this selected area is selected again, all the circles collapse and vanish. The area must contain at least 2 circles for it to go away.

This game mode has no levels either. However you can quickly get in a situation where it is not possible to find areas with 2 or more circles of the same color, in which case the game is finished.
The trick however is that… there is no indication that the game is impossible to continue! There is no computer nanny giving 3 stars when you can’t play anymore. It’s up to you to realize you have exhausted all your moves. Or… have you?

crashes without opening. sad.
----------
Fixed in the latest release. Thanks for the feedback!

This game is a scam. It does not actually work after you download it. Shame...
----------
Works fine for me on my Moto G. If you want real support, consider emailing me details of what is wrong instead of giving a poor 1-star rating. There's a contact information in the google play listing.

A pretty good game. Able to be played on the most modest hardware. Sadly, The latest version hasn't been uploaded to the market yet.

1) Figures can dissappear not in every combination - 1 or 2 peaces may stay. 2) When incoming call while playing the result of the game is lost.

This game gets a bad wrap...ADDICTED!!!!

Game has a bejeweled feel but wayyyy slower. Ok for a quick game play.

Functional but not exciting

This game is like crack... 1 time n ur hooked lol

I love this game. Perfect for waiting in lines or keeping my 10 yr old occupied.