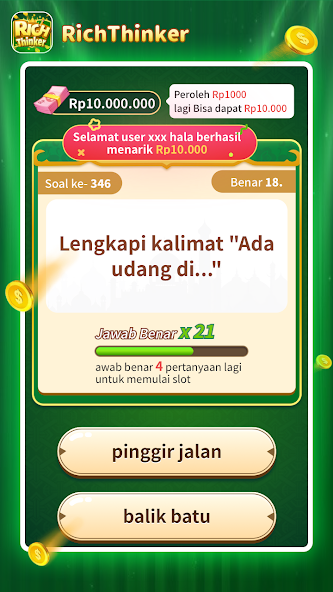 RichThinker, money-making Questionnaire apps.Is a questionnaire application that can make money. By answering questions, you can not only learn various knowledge, but also make money. You can also get lots of prizes by completing quizzes. We are committed to sharing interesting knowledge with everyone and creating value from entertainment!

I don't understand why do people like to cheat with this games, so sad, it's a fake games

Fake and full of scam. Don't ever install this app

Very cunning, when you were about to reach the goal, they literally set it so you won't get nowhere

Not fair....we never know when the game over and when we can withdraw money......forget it....

After getting close to the minimum amount to withdraw, this keeps the amount down. Now suddenly it stuck in loading. I don't even withdraw for once. Whatever. It's bye.

This is a fake money game. Wasting time and wasting your internet quota. I have been cheated by this app. I can not get money from this app.

The trash app, scam app. I can't withdraw, it's app just force you to watch ads

I don't recommend downloading this app. At first, it'll ask you to complete a task by reaching the required balance, but when you complete the first task, you can still not withdraw your money. It'll give you another tasks to be completed.

THIS IS A FAKE GAME. IT IS SCAMMING US TO WATCH ADS. DELETE IT FROM GOOGLE PLAYSTORE. BANNED THE CORPORATION/DEVELOPER OF THE APP PLEASE.

This game is full of lie!!! It's so suck!!! Report this game, cause this game gimme no money and it just want us to level up our level, watch videos with every lie more and more and more ...

This fake game they not pay back. They just wants to use our mobile interney and get the money but not pay back. DO NOT DOWNLOAD THIS GAME. STUPID GAME EVER!!!!