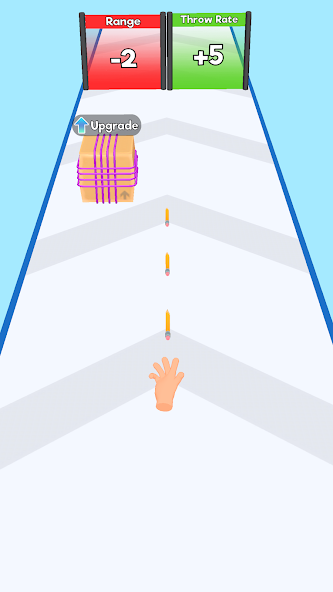 We update Card Thrower 3D! regularly to make this game a much better experience! Here are a few of the improvements you’ll find in the latest update:
* Squashed some bugs - eww!
* Improved game performance - smooth!

Card Thrower 3D! Is an ad filled stereotypical mobile game. It's ads do show what's in the game, but it's nothing to write home about. A time waster and nothing more. If you're looking for a game to spend real time and it be a more satisfying, just take a deeper look through the app store.

It has forcefull ads which kills the enjoyment of playing the game. I will not change my rating to this mot unless ads are remove. I don't want to pay for it just to be remove because I don't see the point of getting revenue over something that can be given for free.

Fun card throwing game. I enjoyed playing it, even though it was fairly easy to unlock everything. Not a whole lot of replayability. I did make it to 28x and level 68. It's worth checking out. 4/5!!

There are so many of these style games out there and this is, by far, the worst. The level takes about 10 seconds to play. And, unless you want to constantly watch ads to upgrade, you cannot get anywhere with it. Very very poor game. Just download any of the other games like this as they are all better.. at least you can advance in the game play in them

as much as I enjoy the game it's filled with ads after another. It's incredibly annoying how someone would make such an enjoyable app and then ruin it by ads. IF you're going to make a game atleast make it so that's it's actually enjoyable.

Fun till level 76. Now it freezes. Exiting out doesnt help. Waiting days doesnt help. No update to fix. 1 week later and icon has changed twice. But still freezing. No help from anyone.

Game play needs more work. I suggest adding stats. You know your base level, but don't know how catching the advantages through the level actually add to that. Also, the levels are too easy. As you level up it doesn't feel like there are more obstacles at all. I paid for no ads, but you have to watch ads for everything in the store, there is no option to buy with the dollars earned in the game. The only thing the dollars are for is to upgrade with seems so silly. Could definitely expand play

Gameplay is fine, but the ads are annoying. This mobile game studio has hundreds of games, but they still have to cram annoying ads into their games anyway. And now people who just want to play the game without the ads can't even turn on airplane mode BECAUSE YOU NEED WIFI FOR A M O B I L E G A M E. THE ENTIRE REASON FOR MOBILE GAMES IS SO YOU CAN PLAY THEM WHEN YOU DONT HAVE ACCESS TO WIFI.

Gameplay is alright, but the fact that fps drops to 1 when breaking boxes with a lot of bands is infuriating. This happens on my Oneplus 9 Pro, which isn't a bad phone either :/ Edit: Turns out it was the haptics that killed the performance, running smoothly now after disabling it

Really bad. Constantly wants me to watch ads which is really annoying. When I was opening a chest thingy after obtaining 3 keys, it said that there was a grand prize of 1000 bucks but after opening all of them, I found out that there was no 1000 bucks. So it lied to me... gotta love it 😑

Keeps freezing at the end of the level, so have to exit out and start again. Have got bonus keys 3 times now, but only one shows up (the one I collect in the level)

Fun game with potential, I would be happy to continue playing if it wasn't for the barrage of obnoxious ads. Ads play even if you decline the upgrade bonus, ads play even if idle at home page, ads play in middle of game disturbing the concentration and enjoyment, ads play even if there is no ad currently available for a bonus, but a random ad will play regardless and you don't end up getting any bonus.

I BROKE THE GAME SO MUCH. First the game bugged so I could get the stuff that you can only get by watching an ad, FOR FREE INSTANTLY WITHOUT IT GIVING ME AN AD PERIOD. But then I Took Advantage and upgraded my income to LEVEL 2000 and my throw speed to LEVEL 1000 And I upgraded my range to level 250. But when I got to a random certain level at 25×, I GOT TELEPORTED TO THE START OF THE LEVEL Like after I started it, but when I made it back that point everything from 1-24×, invisible. won't update

You were already skating on thin ice with the ridiculous amount of ads popping up every minute. But now you've completely ruined it by adding the hands! Why wouldn't you make different skins instead because a floating hand makes no sense and looks awful. The hand looks like it's doing an inappropriate gesture too, not even looking like it's throwing anything. Very disappointed and glad to uninstall after 3 days.

Game is all right in its essence, you throw cards, break stuff and progress. 2 stars because: -Can't get past level 91, it's glitched -Upgrades are barely noticeable -more money upgrade does nothing -multipliers after finish lines do not make sense, they do not multiply anything Too Many Ads

As always, too many ads, repetitive levels, okay gameplay, and trashy ads to support this game. I know its for money but i know better games that can benefit from being free, but not this one.

Same levels. After lvl 59 you start unlocking items you've already unlocked. Tons of forced ads. Upgrades are honestly garbage. I can't even tell if they do anything. Reqs an ad watch to unlock new items. The end goal feels impossible

The actual gameplay is not bad. Typical repetitive levels with upgrades and nonstop ads. A critical flaw at this point is one that most new/inexperienced devs seem to make lately. There is no ability to disable the haptics and it critically kills the game performance even on high end phones. Why do devs think people want their phones to vibrate endlessly for every little dumb thing that happens in their game? Feels like a beta. I wouldn't bother playing until performance issues are addressed.