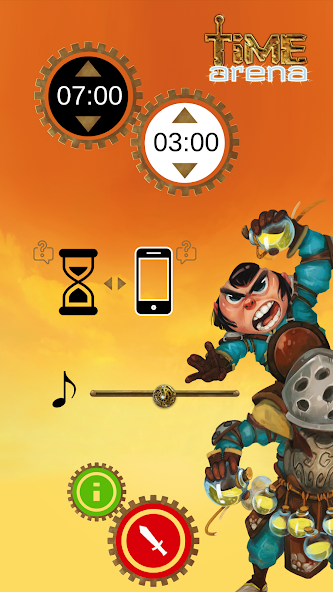 YOU MUST HAVE THE TIME ARENA BOARD GAME TO USE THIS APPLICATION.

This app will allow you to manage time in Time Arena, the real-time clashing game where each second counts!

Trigger the timer on the application for 10 minutes of fierce combat.
KO’d opponents: they can only return to the arena once their hourglass has elapsed.
Your final goal: destroy the opponent’s Totem before your 5 minutes of play runs out.

The Time Arena app is free but you must own the Time Arena board game to enjoy it. Use this app to manage each player’s time, replace the hourglasses with more accurate numerical timers and randomly determine the first player in each game.

Time Arena is a game by Fabrice Lamouille, produced by BLAM! and distributed by Blackrock Games (a list of sellers is available at http://blackrockgames.fr/boutiques.html).