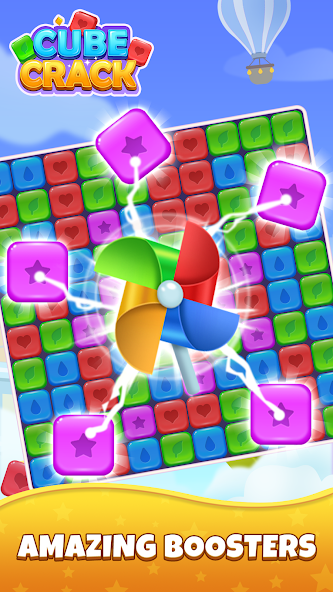 Start your adventure with many sweet cute cubes, collect your bonus through hundreds of FUN levels in this FREE puzzle game！

Features About Cube Crack:
⭐It’s super easy to play! Just click the cubes!
⭐Smash the cubes to collect bonus!
⭐No time limit! Play at your own pace.
⭐Splendid animations with combo win.

I have been waiting for 3 payouts for over 8months now! I over 3xs. They said to send in screenshot so the process can move quicker and so I can get paid. They apologize for the long stalled wait. Well it's been 3 more months since I initially emailed them the 1st time, still waiting! I have 3 payouts that stopped moving when they got down to #5,#4,and#3. Hasn't refreshed in 8mo!. I really wanted to believe that I would actually get paid! But now I have come to the conclusion that THIS IS A SCAM

This game is very good helps with focus, especially if you are seeking a distraction for a couple of hours the rewards will be worth your time. Don't play like a hungry wolf seeking rewards for no time. It's always best to put in your time and watch ads and try other cashapp cash games that come up in ads. I will update you

I downloaded this game almost a year ago. Did the requirements to be able to submit to "cash out" what was earned. The annoying part is I'm a couple months out from it being a year since able to cash out and nothing. Has been constant "5 players ahead" for the $500, and "4 players ahead" for the $1k cash outs I submitted. I play a little here and there, but nothing to advance to next cash out amount. Don't want to delete, but app has been a waste of time and doesn't pay as advertised.

Starts out great with earning money. You have to get to 1000 to cash out. Well I have been playing for over a month now and I am stuck at 990.758....so I am done. Oh not to mention when you get something and it pops up watch this to double your winnings. If you select no thanks it still plays the ad and you only get what you won not the double.

This is supposed to be a money making app however I'm not sure if it's true to it's word. The ad made it seem like an instant withdrawal, but it's not. I have been waiting for over 3 months for my first withdrawal of 500. I am still number 5 on the list. I have been 5 for the last 3 weeks. This is not true to it's ad. I would definitely avoid apps that states you will make money. They are not true to the ad and have additional stipulations that the ads leave out. False advertising at it's best.

Right now it's fun. But this is a Unity game and I'm playing one now trying to get to $300. For each win, they add either one tenth of a point for a prize, one thousandth of a cent cash (I have about $1.20 to go and they're making it impossible to finish!), or one and sometimes zero of the gold coins (you're supposed to get to 3 million which also equals $300). I have a feeling Cube Crack is about to do the same.

After watching all the ads I've been waiting for almost a year for payout. I sent the screen shot of my achievements and got no reply after that. I've been stuck on 5,4,&3 players ahead of me for months. Don't bother with anything from these developers.

This game is a complete waist of time. I have reached three qualifying levels, and have yet to be cashed out. I have even gone so far as to contact the company twice, about not receiving my payouts, and I got some BS response asking me to screenshot the levels, so that payment can be expedited, I did and guess what?? I got the same response, CAN U SAY PRE-RECORDED. These companies need to be held accountable. Planning next move.

SCAM. don't bother with this game. I've been playing since nov 2021 it is now almost been a year and haven't received anything. since June I've been stuck on 3/4/5 players ahead of me nothing has changed. Save your time and energy on this game unless you just want to play the game you will NOT get any money. I've kept it on my phone to see if anything will change, it hasn't. letting the people know all these ads & "playing for money" is not worth it. don't get your hopes up

As much as the game seems easy to play and earn and such but the amount of ads are insane and I have been waiting for 3 plus months now, the number did go by fast but I've been at 150 in line for AWHILE. Now i don't know if this is because people have checked in to get their reward but this is ridiculous. Update : it's now July, I have waited a total of 7 months and have 5 people ahead of me currently. I have waited for so long and would hope this isn't a lie, but I may never know.

It's very misleading. It does not ever let you win. At first it starts out like it should be but when you get close to cash out it stops giving out any of the pieces needed. I have come to find out any app that is put out from Unity is going to be a fake. Don't waste your time.

So far it's alright only downloaded this app to make points for another app. It as good graphics seems to make money fast but like all other apps it say you have to watch so many ads to activate then wait until account down but if your not on the app when it ends it will tell you something went wrong and it starts all over. Post more if something changes.

It's an advertising trap. It doesn't pay so don't waste your time. It starts with you have to reach level 30 to cash out 500 then when you do you're supposedly placed in a queue to get paid and have to wait your turn. It says you don't have to watch ads which is a lie. I've been waiting since February for it to countdown and it's holding a number 5 for 2wks now and I've emailed the developer but if course no response. I really am just keeping the app on my phone to see what's going to happens.

This app seems like it isn't legitimate because I've had it for over 3 months and I've kept it even though I successfully completed all the requirements for a pay out only to be waiting for about 2 months now for the players ahead of me to receive their payments first. They provided the number of players ahead of me and was refreshed every 60 seconds. It started counting down very quickly only to progressively slow down more and more to a dead stop now except maybe descending 1-4 players a week.

You would have better luck seeing what kind of lawsuit you can get for false advertising, your wait time would be much much less. I have a screen recording of on of their ads quoting to have the ability to cash out any amount and it would be applied imedietly. Nothing in the add said "according to terms and services" I don't mind waiting for something, but I'm not waiting on a lie. Action will be taken if action is needed.

The game is fun. I really dont mind the ads even though there are alot of them. I orginally rated a 5 star but had to change to a 3 due to non payment of the $500 with 143 ahead of me for payment and $1000 ahead of me for payment. I have done everything the game asked went up to levels required. Checked the agreement box but here we are a month plus later and no payment. I'll give another week before I delete the game.

Was very close to hopefully getting $300 and the phone I was using the app on broke. Transferred all my data to the new phone and now I can log into the original account I had and I can't even start over with making money, it just opens as some regular game without making money. There's got to be a way to get my account back without starting over. Until then I'll leave it at 3 star review.

Tons of ads. I would be willing to deal with the ads if the payment actually made it to me, could really use the funds. Been waiting almost a month on 2 payments and have plenty to cash out again IF the payments actually come. I'll wait one more week before uninstalling to see if payment arrives. Edit: NEVER received any payments. Dont waste your time or get your hopes up!
----------
Hi Nikki Shepard, thanks for your feedback. The game is fair to all players. Persist in playing will win. If you have any suggestions, please let us know, our email is: westlangsn@outlook.com.

VERY DECEITFUL! They tell you to get to level 30 before you can cash out. Getting to 30 can be challenging because of the amounts of ads you have to endure before completing the level your on. It seems the more levels you complete the more ads you get. Once level 30 reached you get hit with a message of how many thousands of people are ahead of you for payout. That is very wrong and deceitful! Will update my review if I get paid after the 9800+ people.

Terrible app. The ad that I got this from said that payment was instant, but that didn't happen. It say to get to level 30 in 6 days and some change but I can't even complete a level without being bombarded by ads left and right. You get and ad screen every move and when you say no thanks to the ad pop-up it's still playa the ad even tho you just click no. One star this app is trash.
----------
HI Xothegoat, we apologize for the inconvenience caused to you. Advertising is a profitable way for our team to survive. You can tell us your suggestion through westlangsn@outlook.com.Best wishes.