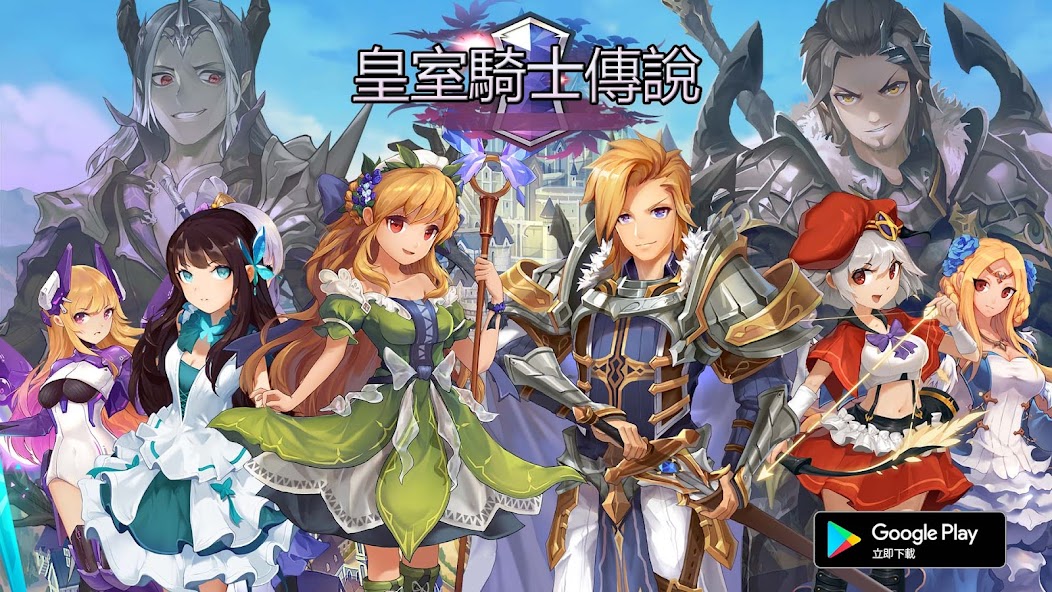 The open beta of The Legend of Royal Heroes is in full swing, and it will be the first to play without deleting files and servers.
The production intention, the operation conscience, do not open the server randomly, it is worth a try! 😊
The perfect fusion of anime-style two-dimensional RPG and light casual MMO gameplay. Enter the fantasy world, assemble the maiden knights, and own your royal castle. Traditional RPG gameplay is readily available, and there are interactive gameplays such as City in the Sky and Starry Sky Season to make the game more playable.
Reach level 5, 10, 15, 20, 25 and there are rich newcomer gifts, including gems, summon tickets and heroes, check the mail to receive.
All heroes lead troops into battle, but there is no need to spend resources to replenish soldiers like traditional strategy games. Enjoy the novel light-tactical arms formation mutual combat system. Appropriate tactics can make up for some deficiencies in combat power and defeat stronger enemies. The battle of gods and demons is about to start, come and join!

📜 Story Background 📜
There are four countries on the continent of Eli.
In the land of light, the royal family has inherited the ancient power of light, which is deeply loved by the people. The current king has been bedridden for more than a year, and all government affairs are left to the young prince Lyon and princess Farah. Because the country has become a constitutional monarchy in the past few decades of reform, all places except the capital will be managed by the mayor and mayor elected through elections, and the local residents will also live and work in peace and contentment.
The Ropto Empire was a huge centralized empire established by Ropto I more than a hundred years ago by conquering and annexing several small kingdoms by force. The current emperor of the Loputo Empire, Merios, has won the support of various noble forces during his ten-year reign, and has managed the empire in an orderly manner, and the national power is unprecedentedly strong. However, according to rumors, although Merios is outstanding, his ambition should not be underestimated. In recent years, he has continued to expand his troops and increase armaments, and the empire has become the country with the strongest military strength on the mainland. . .
The elf country, located in the ancient forest in the southwest of the mainland, is composed of many elf and orc tribes. Elf Queen Amya is the titular ruler and manages the Elven capital Ulsum. Except for the royal capital, the local management power is scattered among the elf lords in various places. Most queens only play the function of mediating conflicts and resolving crises. Most of the elves are proficient in magic and bows and arrows, love peace, and have been friends with the Land of Light for generations. But the elf country and the demons, the dragons and the monsters have been fighting and feuding for hundreds of years, and they are in a state of hostility to the demon dragon country.
The Demon Dragon Kingdom, a new country built by the Demon Dragon King and the Demon King Emilio 30 years ago, is dominated by demons, dragons and various monsters. Fifteen years ago, the Demon Dragon Kingdom launched a full-scale invasion of other countries on the continent, but it finally failed under the resistance of the alliance of humans and elves. The Demon Dragon King was also defeated and his whereabouts are unknown. Now led by the Demon King Emilio, most of the real power in the country is controlled by the five families. Extremely repulsive to aliens, and has little contact with the other three countries, but at the same time, they are in peace.
This peaceful world will usher in another battle of gods and demons. Where will the prince and princess of the Kingdom of Light go? . .

Game Features:
👯 Beautiful Anime Girl Heroes 👯
In this fantasy role-playing game, the protagonist princess can recruit dozens of maiden knight heroes. Each knight has its own set of skills, classes and troop units. Heroes can be recruited by completing biographies and summons. Each character is beautifully drawn in high-quality anime style, if you like 2D anime or cartoon style, don’t miss it!

⚔️ Heroes lead followers into battle ⚔️
In this battle of gods and demons, each knight hero is no longer fighting alone, they have their own unique troops. These loyal soldiers will fight alongside the heroes. Arms are the same as heroes. For example, swordsmen heroes will have swordsmen followers, mage heroes will have mage followers, and knight heroes will have cavalry followers! In addition, followers can also be upgraded and evolved, such as basic Pegasus soldiers can even evolve into gorgeous dragon knights!

🐲 Tactical strategy combat elements 🐲
The battle of gods and demons is naturally an indispensable element of strategy, and the use of formation and arms restraint can make the battle more effective. Such as cavalry can more easily overwhelm sword and shield infantry, but such as spearmen can effectively counteract. Mage hides behind enemy formations and can cause serious damage to your troops if not dealt with quickly, while shooting from a distance with an archer can quickly wipe them out. Of course, all battles have super cute girl knights and gorgeous special effects on display, and players can also control the timing of releasing big moves!

💎Daily Free Diamonds and Rewards💎
In this RPG game, you can get a lot of diamonds during the rookie period. And in order to encourage long-term players, there are many opportunities to earn diamonds every day, such as the first customs clearance, daily tasks, login rewards, etc. If you like the game and recharge support, it is recommended to be within your acceptable consumption range!

Thank you for reading to the end, come and join this battle of gods and demons, I hope you have a good game!