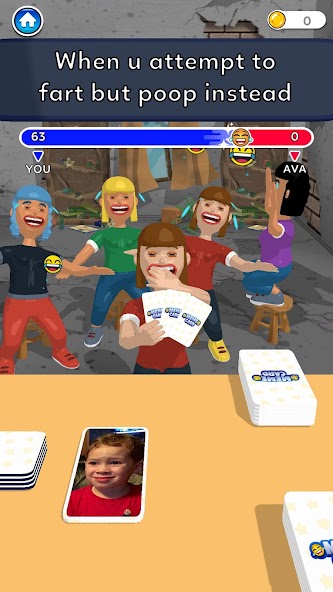 One definition says that memes are to culture as DNA is to life. Funny gifs will make you LOL. Try to make everybody laugh to win this Meme Challenge!

Memes bring us together to laugh at the ridiculous. Make your own hilarious and dank memes and compete with other meme masters. Who will understand the meme culture better will win. This is a challenge of picking the best meme for the situation, the judge is your audience. Try to be the funniest and coolest person in the room!

Compete in tournaments to win new memes. Spend your money at the shop to open new meme packs. If you are lucky you might earn legendary meme cards.

Choose the right meme and make the most people laugh to win big! Let’s laugh out loud together.

Definitely not worth the amount of ads vs game play. After every card pull or one card played and in-between games there is an add. You also aren't able to bypass the extra coins because it forces you to pick something to play another ad. Also the screen doesn't turn so if your camera is on the right side you won't be able to see it.

The game is ok but. We have some problems they can fix one of the things is animation. Animation is the same to every character also Grammer and ads are problems but so far it's funny and fun to play. I'm fine with the animations, but again this is something for the editor to fix, also duplicates are often you can barely get new cards. It's ok well you might be able to give duplicates if you want.Yeah so for the game is ok.

This would be a good game but to many ads. After 10mins I'm over it. Uninstalling the game as it's not worth the space on my phone with all the ads. It they had an option to pay for ad free I would have done it cause like I said the games good but the ads kill it for me.

When I first started out, I thought this was pretty good. Then some update happened & now my game upgrades reverted back, the characters look ugly, & eventually things stopped being fun. I got alot of duplicate cards that would be ok if I could trade them, but since cards are already picked for trading I can't get rid of duplicates. In terms of the main game at this point it just became monotonous & sometimes bizarre in how I'd fail alot, the other modes are forgettable & gave more duplicates.

This game would be good if there wasn't so many adds. Every time it gives me and option to watch and add for extra stuff and I click "no, thanks" they have the audacity to give me an add and they don't really let you play the game. They keep making extra pointless stuff like spinning a wheel, pick cards, find the difference, rate the cards, and then after all that you can play the actual game but in the middle of it they put an add in the beginning, middle, and end. Overall the game is mid.

The game itself is fun however the ads are insane, its in between everything rather than at the beginning and end of a match, I never mind ads but god **** these are insane! I cant express to you how many ads there are!

This game is pretty fun but there are some issues with it.. 1. There are WAY too many ads to be able to play, I haven't tried playing with aeroplane mode yet tho, 2. All the characters a Look like there men, It runs like your a boy and says things like "girlfriend" Being gay is a thing yk. There are other problems but I can't list them rn. The game isn't Terrible but not great either. Idk if I'd recommend downloading but yeah.

The game,when I'm able to play it, is actually really fun. I only just downloaded it. But out of the 10 minutes I've been playing it. I would have to say at least 6 and 1/2 minutes have been ads already. kind of ruins the fun

This game isn't multiplayer, the memes seem to be ranked on a rarity basis. You spend more time opening the packs, watching ads, and doing all the mini tasks than playing the meme game. Even the no thanks buttons, and in between card placement rounds have ads.

The game overall could be such a great game if there weren't so many invasive ads! I don't usually mind ads but if you say no to watching an ad you get one anyway (you can skip it) but then it offers you another reward and you reject the ad and you get another! Then mid game too! It's just a lot!

decent meme based game, lots of great memes in there. The upgrading concept adds that element of grinding away levels which is entertaining. Lots of ads too so that's an automatic star off, but extremely easy to just pick up and just start playing so it's a 2 star for me dawg.

Honestly it's an alright game but the amount of adds are ridiculous it's add- ga(add)me-add, and not every level is the meme game, when you think each round takes about 10 seconds and the adds last longer than the rounds it's pretty ridiculous, will be deleting because of the adds.

Wanna play "Ads: The Game?" This is for you. Want to answer two questions in a row? Fool, have an ad. Want to skip the multiplication bonus at the end of the level? Psyche, have an ad. Turned down that bonus because you're sick of ads? BOOM, have an ad moron. The game is rubbish. And AI messed up, who can beat you with worse cards. Token upgrades to ugly graphics for ten seconds gameplay and four minutes worth of ads. Nope. nope. Don't do it. Unless you like ads and hate your battery

The game itself isn't bad, but there far too many ads, and everytime there is an ad, it takes me back to the round I just played, but against someone new. And the game is incredibly laggy for no clear reason. Would not recommend.

Would love to give it a perfect 5, but the ads spoil the fun. I understand ads are how you get money, but put them at the end of the rounds instead of all through the rounds. Plus monitor the ads, some are broken and causes the player to have to close out the game. Do this and you'll have a high ranking game in no time. But what do I know, I just play games

This game is INFESTED with ads!!!!!!! I've absolutely had it with them! It would be a decent game if I could play it for more than 5 seconds without getting interrupted by a stupid annoying ad every 2-5 seconds! Fix this game!

Annoying, I actually enjoy playing the game but there's so many ads and no "buy for ad-free" option. There's no point in ever saying "no thanks" on selections cuz you're still forced to watch an ad, so might as well do the ad bonus stuff since you'll be watching an Ad anyways. Each round, each session, each reward choice, each mini game all have an ad. 8 ads for 1 second of play and no cost to remove ads is so annoying.

It's ok, the characters repeating don't bother me, or the filler between. The biggest problem is the card. I will open the app and find that I have cards I haven't discovered and it is frustrating, simply because I was looking forward to seeing it for the first time. And getting that one step closer to completing the collection only to have cards I haven't seen that will say duplicates.

It's a somewhat of a good game. The grammar isn't top notch, the ads are a little too forced, the animations aren't the best, but you know, there's always room for improvement. Such as instead of using "ur and u" you should use "you're, your and you are". Plus, one more thing: even though I get more points than the other person, somehow I still fail? Obviously the coding or whatever isn't the best, and this shows it. Try fixing the game!

When it comes to ads to play time, this game is THE WORST. 10 second game, ad. Open a pack, ad. Trade a card, ad. Literally everything you do has an ad after it, even if it takes 3 seconds to complete. Avoid at all costs. Also seems like it's either female heavy or sexual things heavy. Weird tbh. The devs are either middle schoolers, or that weird virgin dude you always catch leering from around the corner.