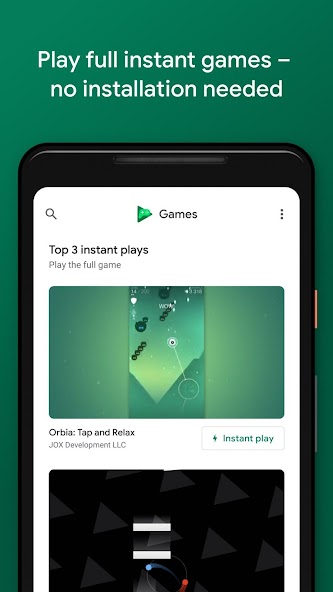 Games are more fun with the Google Play Games app. We’ll help you find your next favorite game – from action to puzzles. And with “Instant play,” many games require no installation. Really. Save your progress and track your achievements as you level up. Plus, you can pick up where you left off from any device.

I'm writing this review hoping to get your attention. This app is one of the core Android apps. It's very useful for saving my game progress and allowing me access to certain features on games this is exactly why I believe you should pay more attention to it. The app is very buggy(if that makes sense). I can't even get past the loading screen to use it and others have mentioned that other problems such as it randomly closing. I'd appreciate it if you could check on the app and work on this.

This app is garbage but you need it to run almost all other apps SMH Google and the games can be fun if you've got nothing else to do but a few won't load and it gets annoying after a while it also constantly closes out and deletes some of the progress I made before it shut! Google you are rich and have thousands of employees yet one of them couldn't fix a simple thing that runs a lot of our stuff? Get your act together!

For being a core android app, this app is complete garbage! I get network issues all the time, not because of my network that works for everything else, JUST this app. Some downloads freeze halfway, no matter how many times I restart, and other times I get a image of a sad satellite saying Try Again. I also have "auto update" turned on but every time I check there's like 20+ apps waiting to update. It's also just a bad, confusing interface. Come on Google, get your act together!!!

Oh my goodness, no words can describe how awesome and incredible this game is. First off, the detail on this game is beyond good, also the story line is so suspenseful and crazy good. The only issues about this game is probably the lack of ads. I just recommend the developers, or the people that made this game could please shorten the ads, cause it does get annoying, but other than that, it's amazing. Also, the fact that it's free is shocking to me, the point is I highly recommend this game! :)

The Google experience is one of scamming and intentional overdraws of accounts. I will NEVER trust them with my credit card information again. The payment system on Google Play will make it appear that it's going to charge your gift card first and put the rest of the amount on your credit card (there's a slider, known in civilized times as a checkbox), but then it'll just charge the full amount to your credit card without permission. And they have NO support system. It's all automated. FU, G.

Best Ever!!! Only thing I would change are the prices. Some games are great in the paid section, but most are either a waste of time or just glitch ridden and full of ads. Nobody wants to stop playing every 30 seconds to watch an ad for another game thats filled with issues as well! Other than that Google is the best place to find what u need and the correct information. Thanks google

For me, the only thing I need this app to do, is save my game account and login for each game I play that allows Google Play sign-in. However, the major flaw is if you want to delete the Gmail associated with it and a game, you cannot save or store that progress. Seems like an easy fix but it has never happened. So you're forced to keep the Gmail account associated with a game or lose all of the progress in-game.

For me, the only thing I need this app to do, is save my game account and login for each game I play that allows Google Play sign-in. However, the major flaw is if you want to delete the Gmail associated with it and a game, you cannot save or store that progress. Seems like an easy fix but it has never happened. So you're forced to keep the Gmail account associated with a game or lose all of the progress in-game.

For as long as I've used it, has been totally reliable for backing up my game data and profile for compatible games. Sometimes it's a bit wonky with auto sign-in, and I feel like it doesn't always tell me when an achievement is earned. Also fun that it comes with some simple games like minesweeper, solitaire, and snake that are available offline and can play anytime. Overall, a well rounded gaming app 🖒

Play games really helps with saving my progress on all that i have. However the login and progress save bar is the most annoying thing in the world. Not only is there no way to turn it off but it freezes my entire device and sometimes it will appear multiple times and it will stay there for several minutes. I just want the ability to turn it off
----------
That's not the experience we'd like you to have. If you are experiencing an issue with the Play Games app, we recommend these troubleshooting steps: https://goo.gle/34RPRuM. If that doesn't help, we recommend reaching out to our direct support team for further assistance: https://goo.gle/2QyJZSb.

It's a good app, I just want to say that when you play online games back to back in the playlist menu there's an absurd amount of input lag. I "played" call of duty mobile through it. I put "played" quotations because aiming was impossible since every time you aimed it took 2 seconds to catch up and by then you had basically done a complete 180. 95% of the game mechanics are broken if you play it through Google Play. It's something that will happen when you stream games.

Update: Google helped me immediately and their instructions helped fix the issue. Thank you, Google! I just looked at this for my AC Pocket Camp game and it shows I've only met 2 achievements, which is absolutely incorrect. I am at a much higher level than is required for the other ones and it isn't reflected. Super disappointed.
----------
That doesn't sound good, Jaclynn. To learn how to restore your saved game achievement, see this article: https://goo.gle/2RE11zN. At this time, not all games are eligible to save your achievements & progress. If you're still having issues for eligible games, contact the developer directly: https://goo.gle/360gizQ. Hope this helps.

Used this quite a bit to record and share gameplay. The latest update keeps that functionality, but it is more awkward and gets in the way of gameplay when not using. Still working to get it figured out, but I'd prefer the old way as an option. It appears in order to get to the recording feature you have to launch the game through the app as opposed to accessing it through the game. Not a fan of the change.

The Google Play Games account makes this game unplayable. If you the screen turns off or if you have to leave the screen at all you are confronted with a "select game" screen that doesn't go away no matter how many times you click select. You have to actually close the app and lose all of your progress to get out of that screen. I really love the game but I reccomend that people buy it on the Switch instead of on Google (their save system is full of bugs).

I've tried using this app specifically because it has the built-in screen recorder. Android does not allow third-party apps to record system audio. (You have to root your device for that.) But the recorder doesn't launch. I have to uninstall the app then reinstall it to get it to work once, and that's all I get. If this is what you're using it for, look for other screen recoding apps (and consider rooting your device). Pixel 3 XL

I've just switched to a new device and I'm currently downloading apps that were on the previous. I would like a way to prioritize the download beyond simply turning items off on the download list. There are applications that I need for work, but the games are downloading first. A little more user control would be nice, or if there is already a way, more direction towards options may be needed.

This app has great integration for games. It even allows you to launch games from it, making it my go to app for opening games and viewing achievements. I only wish that the app loaded faster. I wish I could use it as a replacement to a folder with all my games in it, but it's so slow to load that it makes opening the last game I played take a few extra seconds.

No problems with the app itself. Just wish it allowed transferring as much of it as possible to an SD card. Have an older tablet where Samsung is not upgrading the OS past version 5.1.1. This version won't see the entire SD card as internal storage. This issue is not exclusive to Google Play Games. It's just a pain when the tablet's internal storage can't be upgraded beyond 32 GB and it's running out of space. Am doing everything possible to disable unused Samsung apps, move all data files to the SD card, and much as other apps as they allow to the SD card. So every app that doesn't allow this is a problem when trying to squeeze more life out of a 4.5 year old tablet.

I'm not sure if it's this app or the Google Play sevices that keeps stopping are crashing but I have attempted to uninstall the app and it continues to flash this stupid annoying notification saying that Google Play services have stopped working even though it has been uninstalled!! I have left numerous reports about it and Google does nothing to fix it! I am getting sick of Google!! They don't fix anything and their products are getting worse!! There are too many other companies out there that will do a better job at fixing what needs to be fixed! I'm thinking of switching!! Hell I could barely write this review because it keeps doing it every 3 seconds!!! Not worth the frustration!!!!

Well, I play on the Samsung Chromebook 3 and ever since the last update before this one... I haven't been able to play Pokemon TCGO, it like took away the ability to tap on the screen from my trackpad, and so it's pretty much unplayable. Either than that, this app works great but I really wish that could get fixed.