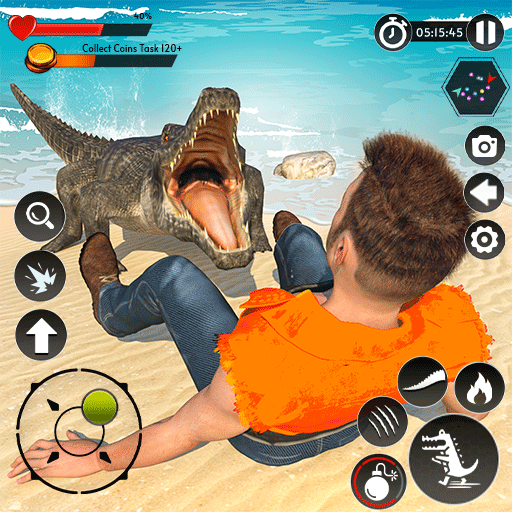 This animal game is designed in a way that the user will never get bored of it, the endless beach and island environment are boundless so travel from one island to another. Your angry crocodile can swim and run on sand to chase humans in crocodile games. Humans are innocent but this crocodile is mean and he would do anything to fulfil his hunger. If you are a fan of animal games then this game has a lot of things that will excite you. Most exclusively the Animal Hunting Mode where the crocodile will attack innocent animals on the islands.

Animal Simulator games are exciting to play so we designed this game with a crazy animal attacking other animals. This game has both offline games and multiplayer games mode where the user will compete with other crocodiles and the one crocodile that will achieve his objective will be declared winner. Compete with crocodiles of the world and become champion of Multiplayer Games Mode. This crocodile games also offers offline games mode where the user will fulfil the objectives by Him/herself. Attack the humans and animals roaming around different islands of Latin America, thailand, philippines and famous islands around the world.

This is a detailed game with animal hunting games mode with multiple animals to hunt. Become an animal hunter and hunt all the animals. This mode also has deer so this becomes a deer hunting game for instance when your Hungry Crocodile will attack and hunt deer like deer games where you have to perform Deer Hunting like a professional Deer Hunter. Animal Games are nowadays popular among everyone and this crocodile game is giving you everything that you have been searching for. Enjoy playing at funfilled realistic environment of the island with crocodile hunting mode which will test your Hunting Games skills.