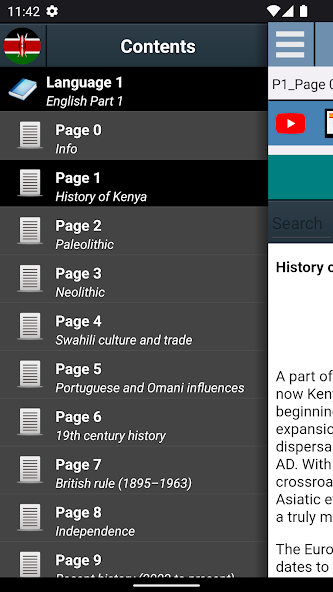 A part of Eastern Africa, the territory of what is now Kenya has seen human habitation since the beginning of the Lower Paleolithic. The Bantu expansion from a West African centre of dispersal reached the area by the 1st millennium AD. With the borders of the modern state at the crooads of the Bantu, Nilo-Saharan and Afro-Asiatic ethno-linguistic areas of Africa, Kenya is a truly multi-ethnic state.

The European and Arab presence in Mombasa dates to the Early Modern period, but European exploration of the interior began only in the 19th century. The British Empire established the East Africa Protectorate in 1895, from 1920 known as the Kenya Colony.

The independent Republic of Kenya was formed in 1964. It was ruled as a de facto one-party state by the Kenya African National Union (KANU), led by Jomo Kenyatta during 1963 to 1978. Kenyatta was succeeded by Daniel arap Moi, who ruled until 2002. Moi attempted to transform the de facto one-party status of Kenya into a de jure status during the 1980s, but with the end of the Cold War, the practices of political repression and torture which had been “overlooked” by the Western powers as necessary evils in the effort to contain communism were no longer tolerated.

Moi came under pressure, notably by US ambassador Smith Hempstone, to restore a multi-party system, which he did by 1991. Moi won elections in 1992 and 1997, which were overshadowed by politically-motivated killings on both sides. During the 1990s, evidence of Moi’s involvement in human rights abuses and corruption, such as the Goldenberg scandal, was uncovered. He was constitutionally barred from running in the 2002 election, which was won by Mwai Kibaki. Widely reported electoral fraud on Kibaki’s side in the 2007 elections resulted in the 2007–2008 Kenyan crisis. Kibaki was succeeded by Uhuru Kenyatta in the 2013 general elections. There were allegations that his rival Raila Odinga actually won the contest, however the supreme Court through a thorough review of evidence adduced found no malpractice during the conduct of the 2013 General Election both from the IEBC and the Jubilee Party of Uhuru Kenyatta.

This app is develop for education and research purpose with fair use law is apply under creative common license and does not violate the policy about Google-served ads on screens with replicated content .Fair use is a doctrine law that permits limited use of copyrighted material without having to first acquire permission from the copyright holder for education and research purpose .