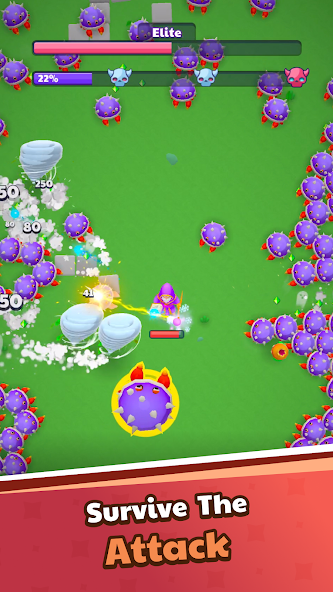 Take control of Wizard Hero and fight against hordes of relentless enemies.
Use your arsenal of spells to drop them down like a blob!
Destroy waves of unique enemies including all kinds of monsters like dragon, orcs, skeletons and many more!

Grow your character as you play and get stronger after each attempt.
Learn a new skill or improve one of the ones you have every time you level up.
At each attempt, create unique spell combinations from thousands of possibilities.
Do you think you have what it takes to become a survivor ?

Got better but still crashes I can't access anything other than the level play. Can't change character, improve skills. Please fix ASAP.

Not so bad but crashing waaay to often! As hard as it is to progress, this makes you loose interest quite fast.

I found it to be an amazing game, but it crashes in the middle of the game sometimes

As a fellow game dev I think you should put (beta) in the title 'cuz once I get hooked and I beat the last boss and it just restarts? Also there's a stupid glitch where chain lightning attack crates at 0 hp and makes them disappear that messes up the whole ability for most people and they won't use it

Awful performance, so disappointing! Fix it!

I like this game, it's enjoyable and a great time-killer, but why can't I choose/upgrade heroes and why isn't there any quests?

Fun BUT..........On my phone there's only 1 level, no upgrades or characters to choose from. Really confused by the pictures of those things on here.

Game has potential but seems largely unfinished. You collect coins but nowhere to spend. Game ends abruptly and crashes.

The app suddenly crashes while you are in the middle of the game. Still needs a lot of improvement. But I like the skills though. This has a potential to be a craze. Please fix this. It's super buggy.

The game is fun but it's discouraging when your playing and winning and then the game closes so thats why this game deserves A 1 star review.

Seriously great potential... no upgrade system available. Have uninstalled and reinstalled and made it to the final boss I the first area and he's nowhere near me and I still instantly die. Sound needs optimizing too. Please fix and I will give this game 5 stars. It really is fun...

Everything I get about 15 and a half minutes into opening the game, it crashes. I have yet to complete a round because of it.

Would have given 5 stars but the game literally crashed at Wave 80 on Samsung Galaxy Flip 3. So I know my phone isn't the issue.

There's nothing to upgrade after each game, the game crashes repeatedly, gets old fast

Game continues to crash even with latest update. About fourteen crashes in a row, which means I lose all gold and progress each time. Would be fun if it weren't for the crashes.

It's a great game and I've already done the thirty minutes challange and you end up dying instantly from that weird creature. My problem though is that my skills are all maxed out and I can't unlock more characters because of the max out a skill mission.

It's a fun like arcade-ish type of experience not unlike that of Vampire Survivors. However, it does have some issues. It's pretty poorly optimized- the game would crash frequently for me. Sound would cut out entirely if a lot of enemies were destroyed at once, and the only sound option is to turn everything on or off. In addition, extra skill slots are locked behind a paywall and there is NO way to get rid of ads, but the ads are not intrusive, so that's no big deal.

Really enjoyable game especially when you get multiple powerups however my game keeps crashing when it gets hectic when there is lots going on and I don't believe it is due to the platform im playing on (s21 ultra) But this is to be expected as its a very new game. I am excited to see it evolve👍
----------
Hi, sorry to hear you’ve been experiencing some crash issues. We resolved some of the issues on our latest update, and we are working on the rest.

Game is fun. Little like Brotato but still different in its own ways. Only feedback I can give is crashes. I hate when yhe game freezes and you can do nothing but reload the game.