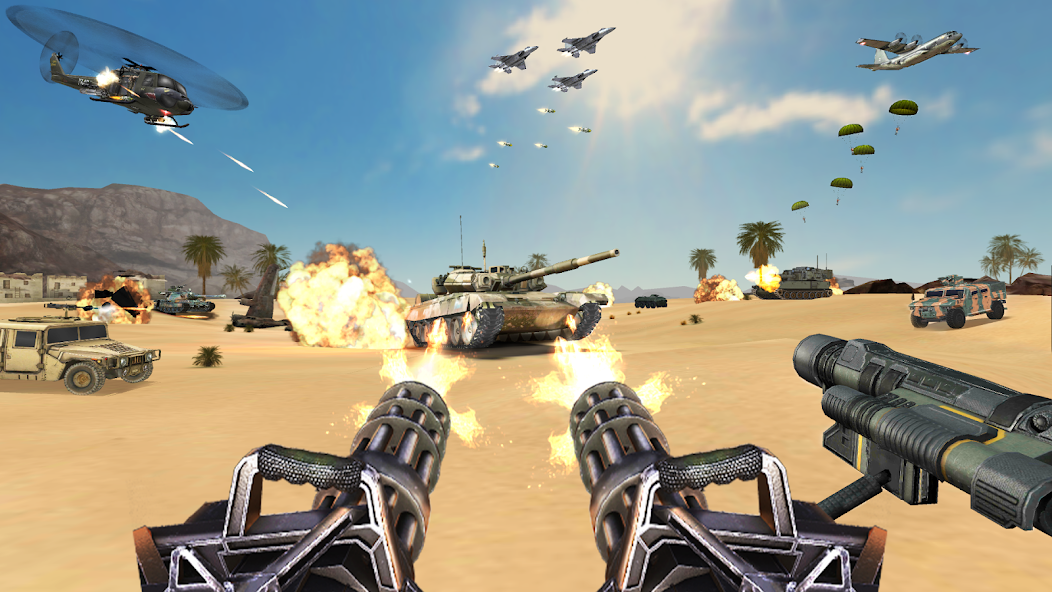 HELLO BRAVE SOLDIER
Welcome to War Zone: Fight For Homeland, a world of intense warfare, explosion for brave shooters to come and explore. So many powerful machine guns and a variety of weapons are ready for the hero to pick up.
War Zone is an action shooting game where you become a shooter defending your land from multiple battleships, fighter planes, battle tanks, battle robots and rockets of the enemy.
Trying to survive till the end of every battle is your duty in War Zone.

How to play:
💥 In War Zone, players have the task of protecting their ground and fight against the onslaught attack of enemies to survive. You will have to shoot and destroy their army ( from infantry, heavy tanks to aircraft equipped with missiles, etc.)
💥Fight back the enemy weapon systems include MB78 tanks, Fuchs APCs with turrets and missile launchers, battleships, Cobra Attack helicopters, CH53 Shercoskys, F101 jets, aircrafts and C-130 Hercules that transport rockets, bazookas, machine guns…
💥 In the beginning of Beach war , the enemies military will appear sparsely by the beach but as the tasks become more difficult in later stages, attackers are more crowded and the rain of firing guns, rockets and missiles will pour down on your tank. You will see the invader’s helicopters and fighter planes everywhere in the sky, constantly throwing bullets at your position.
It’s your duty to find the way to shoot back and win the war.
Strike back as hard as you can, soldier.

Some key features:
🚀 Over 10 different locations in War Zone: gun shooting game await you.
🚀 Weapons ranging from 50 mm machine guns to heat fuze rockets, javelin launchers, NLAW…
🚀 Hundreds of fighters, ships, guns, drones along with other Beach War weapons and vehicles.
🚀 Each warfare in Beach War, you will get support attacks from B58 bombers.
🚀 Realistic weapons (Bazooka, M60 machine gun, 75 mm AT, Gattling …). Some of your weapons even have rockets attached on a side to strengthen your power.
🚀 More than 50 types of battle tanks you can find in War Zone.
🚀 The invaders have powerful weapons, such as: MB78 tanks, Fuchs APCs with turrets and missile launchers, fighter planes, Cobra attack helicopters, CH53 Shercoskys, F101 jets and C-130 Hercules transport aircraft …

🌐 Offline FPS Feature
Don’t have an internet connection?
You can still play War Zone: gun shooting game in offline mode.
The campaigns you play online, still can be played without Wifi connection.

🌍 Meeting your comrade brothers
Many new friends from across the world are waiting to chat with you.
Let’s join War Zone community and share your stories, experiences in the game with them