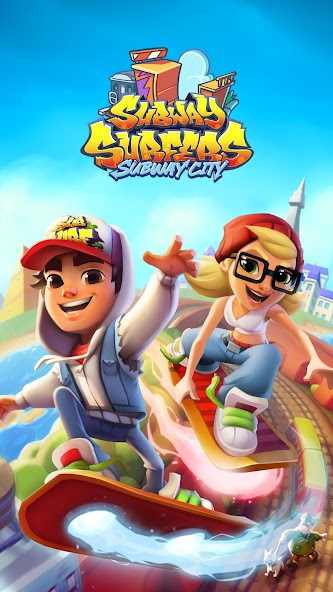 - The Subway Surfers World Tour shows off some pride in San Francisco!
- Suit up with our newest hero, Super Runner Tricky, and her decked-out Trickster Board while playing through the Super Runner Staged Challenge.
- Celebrate this colorful season and all its lovely rewards with the Pride Calendar.
- Access World Tour Events and travel to different destinations while gaining amazing prizes!
- Play through the Season Hunt to unlock a new variation of a fan-favorite Surfer, Pride Miss Maia.

DASH as fast as you can!
DODGE the oncoming trains!

Help Jake, Tricky & Fresh escape from the grumpy Inspector and his dog.

Join the most daring chase!

This game is very entertaining and makes your free time less boring. The issue is that during these Super Runner Events, it always resets and brings me back to Stage 1, even though I may be at Stage 3 or 4. This has happened to me twice and I don't know what to do. Please fix this as I believe other people are experiencing this issue as well.

Great game when it doesn't break. I was on the 5/5 stage of the most recent super surfer challenge. While playing, i watched an ad, and after when coming back to the game, I was sent back in time for the 10th anniversary super surfer instead. After restarting the game, I was/ have been put back to stage 1/5. Additionally, there are frequent times when your inputs don't register when playing, sometimes causing you to lose.

I used to play this game a long time ago. I just came back and the UI changes and new game modes are actually really good. However, I am not a big fan of the new loading screens, and I would love it if you brought back the old one in a modernized form. It would also be nice if you guys add hints of the old UI into the new one (the calendar background was iconic, and the distorted theme music that used to play on the loading screen).

Though I like the game, it has some small bugs in it which I hate. Now I'm not saying that the game is bad, it's just that it's kind of annoying sometimes. Like for example today, I encountered a glitch/bug where all my progress in Iceland update, just suddenly disappeared. I was so close to getting the new character since I was at stage 4/5, but then I logged in the game, all rhe progress disappeared.

I love this game very much, and it's been an integral part of my childhood, but I've been experiencing some issues with the new super runner challenge; especially the one for Super Runner Fresh. I got to the 4th part of stage 2 on that challenge, and then it switches to Super Runner Jake for some reason (even though that challenge is over) and by the time it switches back, all of my progress, play-time, wait-time, and boosts were completely wasted. I'm now back at the beginning. Please fix this.

This game has been around for a while. I've collected many characters and power-ups. All while connected to Facebook and Google games. Yet I can never get back previously collected characters, coins, etc. Now there are mandatory ads? There's no purchase options to remove the ads. What's the point of playing if you have to start over and forgo any progress you previously made. This is my final uninstall.

The game itself is good, but everytime the "Merge Dragons" ad appears, the game crashes. This is very annoying when I've been playing for a while and watch an ad to revive, and then have to close the app and lose my progress. None of the other ads seem to do it; Just the "Merge Dragons" ones. Please fix this, or just don't show those ads.

I love this through and through. Events are pretty frequent, there are lots of characters, maps, hoverboards .etc, but it's the ads. The ads don't even work most of the time and there all not even videos so I can't get my reward. Not only that, my super runner progress literally all just restarted and now I'm pissed off as hell. I just left the game and then got back on and now I'm on zero progress??? This game needs to fix itself.

I play this game very often. I really enjoy the game it's fun and I love the different theme's each month. However with the new 10-year anniversary super runner challenge I have been experiencing issues. Every time I get to a different stage and then leave the game and come back it starts me back to stage one which is completely unfair. The problem needs to be fixed.

I love this game don't get me wrong this is actually one of my favorite games but I had to vote it a 3 stars sadly because of 1. The ads and 2. The paying perspective. For the ad problem there is just way too many ads but I ain't got no money so I'm not getting rid of them. And for the paying problem all of the characters that are interesting cost real money, now don't get me wrong I love saving up keys and buying characters that way but real money is too far too me! I love your app bye!!

The game is really fun! I like the events and the character's you can get from each place. There's like not a lot you can complain about execpt one thing. The Ads. There are are a lot of ads. I go to the home screen. ad. I go to the me screen. ad. I guess that's all there is to complain the ads are why i'm giving this 4 stars. ( I also really like the super runner characters)

Subway Surfers is a good game yet can be very glitchy and boring at times. When you start the game you have to spend an hour or two getting fast enough so it is fun and often some of the barriers or little to impossible to do. This is also got mods which ruin the game for normal players. Several glitches allow you to get infinite score and this doesn't make it fun at all. You can't really play for more than 30 minutes. However sometimes when you have a good score and there are no glitches it's

I love this game. I suggest it to anyone you want to waste time on a game. I do wish there were more options to get event coins but oh well. Also I have this weird bug where I leave the game to watch a add then when I go back into the game the audio is gone. You need to leave the game completely to get audio back. If there is any way to fix this please help

There's nothing wrong about this game! Graphics are good. Barely any lag. Now there are some ads here and there but you can skip them. However if you lose there is a button when you die you can press watch ad. But if you're bored of the ads you can just use a key but if you don't have enough keys just watch an ad but soon if you use to much ads you can't use anymore you have to use keys. But overall it's a pretty good game! Surfing dodging the trains, obstacles. Stay safe and bye! Love leah

Ah, yes, good old Subway Surfers. You honestly cannot hate this game. Its a fun infinite runner game with barely any forced ads. Even when there is an ad, you can instantly skip it. Watching optional ads can be great for getting rewards and coins to buy unique skins, hoverboards with powers and trophies for a nice collection. Definitely recommend this fantastic game. 10/10

Cool game and I like how developed the game is. I still remember when the character skins were very expensive like 90,000 coins for one but I'm glad that it's now reduced. It's now cheap and easy to unlock. And I'm happy that there's option where you can change the music to one you like. Very cool word puzzles and rewards and you can even play for your country. But one thing, this game has some ads, please just reduce them. Continue making updates, I recommend playing it!

Hey!! So this game is really amazing, all the characters are cool and colorful the boards are cool and have amazing designs not to mention the graphics but there's one problem I have. Losing progress.. yeah I had just gotten to a new high score while playing like idk 10M? But then it close out of it for a lil bit then when I go back all my progress is lost and my new high score wasn't 10mill it was 2mil (which was my high score before playing that game) so yeah if you could fix this :DD

No problem with the game itself. There's only a problem on the way in which my keys are counted when I use them. For some reason, it doesn't go in numerical oder. PLEASE fix this, ty. I STILL stand with this review, however now, the alot of the ads don't play. You can't even back out of the ads that won't play. The only way out of these ads are to completely leave the game, which as a result makes you lose your progress for what you just played. CREATORS, PLEASE HELP, TY!

This is a great game after all. But the problem is the ADS!! For example if i want to duplicate my reward, i need to watch ads, but when i click ad button it puts me to ad for a second and RESTARTS my game... I can't watch any ads without getting my game restarted... Its so annoying... BTW you should add some more characters too. In shop for lifetime.

I've always enjoyed Subway Surfers, the features are amazing and all, but I have a small problem. Everytime I get to open new characters or boards, one or two days later the game restarts again. Where I have to play from the beginning. My characters disappear, the coins I got. My high score, everything. I would love for you guys to please change that, because I always thought it's my phone but it's not.