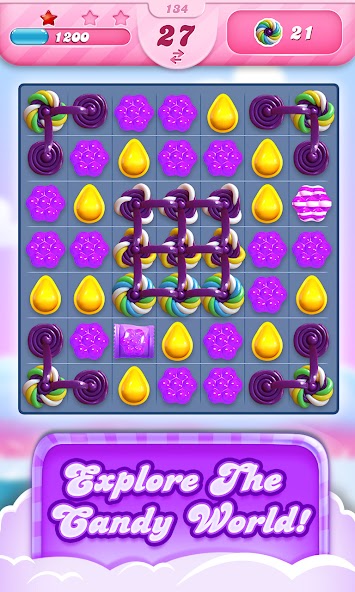 We hope you’re having fun playing Candy Crush Saga! We update the game every week so don't forget to download the latest version to get all the sweet new features and levels!

New to the game? Don’t be shy, join the fun!

Coming back after a break? About time!

Switch and match Candies in this tasty puzzle adventure to progress to the next level for that sweet winning feeling! Solve puzzles with quick thinking and smart moves, and be rewarded with delicious rainbow-colored cascades and tasty candy combos!

Plan your moves by matching 3 or more candies in a row, using boosters wisely in order to overcome those extra sticky puzzles! Blast the chocolate and collect sweet candy across thousands of levels, guaranteed to have you craving more!

🍬 THE GAME THAT KEEPS YOU CRAVING MORE
Thousands of the best levels and puzzles in the Candy Kingdom and with more added every 2 weeks your sugar fix is never far away!

🍭 MANY WAYS TO WIN REWARDS
Check back daily and spin the Daily Booster Wheel to receive free tasty rewards, and take part in time limited challenges to earn boosters to help you level up!

Take on this epic saga alone or play with friends to see who can get the highest score!

Easily sync the game between devices and access full game features when connected to the internet.

Candy Crush Saga is free to play but optional in-game items require payment. You can turn off the payment feature by disabling in-app purchases in your device’s settings.

By downloading this game you are agreeing to our terms of service which can be found at https://king.com/termsAndConditions

Do not sell my data: King shares your personal information with advertising partners to personalize ads. Learn more at https://king.com/privacyPolicy. If you wish to exercise your Do Not Sell My Data rights, you can do so by contacting us via the in game help centre or by going to https://soporto.king.com/contact

Primarily, a game of getting a lucky board, in app purchases or watching long ads. Updates and changes have taken much of the skill required to complete a level out of the game. If you have a lot of money to spend on boosters then you will enjoy the experience. Most of the opportunities for earning boosters have been all but eliminated. In addition, the game will find a way to crash after watching a long 30 second video in which you will lose the level. CC are aware of this but refuse to fix.

Very addicting game. However, it's a RIP off. Once you're hooked, levels become IMPOSSIBLE to pass without buying Boosters or Gold. They want you to get frustrated enough when not being able to pass a level that you buy something to pass it. Their Q & A even has the gaul to state LOTS of people pass all the levels and complete the game without buying anything!! That's the biggest piece of Bull I've ever heard. I'm past level 1000 and have had enough. Good luck and don't forget your Credit Card

It's a great game overall,love everything about it apart from how it sets me back. I do have a profile and my progress has been,but once I uninstalled this app while I was at level 802 and when I installed it again I was at level 598. Which is so so damn frustrating because I spent so much time actually getting to different levels,it happened twice to me and I demand that you actually save people's progress and not just say so. It's really a waste of time to keep repeating the same levels,

Great fun; super addictive! Still a great way to distract yourself from something like the long wait at the DMV. ha! Still love it even after a year of playing. Still love this game; even after years of playing. I feel like it used to be harder but it's still a good way to waste time. I appreciate all the video options to gain boosters. Looks they did another update a d made the levels a little harder. Welcome the challenge. Took a break but now I'm back and still love it. Yay!

I downloaded the app to my tablet as part of an offer challenge. The first few days it was pretty good. A glitch occasionally would send me back to my home screen and I would lose progress on that level. Today I can't get through more than 3-4 moves before kicking back to homescreen. I have lost props and patience with this issue. Fix your glitch please

It's one thing to make the puzzles challenging, but it's ridiculous to not be able to solve a level after 30+ tries. Every level is supposed to be beatable without the aid of boosters, that's the challenge. Also, based on how poorly everyone is doing in the weekly contest, suddenly the levels aren't beatable. Care to explain?

Game was cool at first now I have lost interest. These retarded nightmare hard levels uncalled for. The way you guys have this algorithm set up to clear 200 items with 20 moves is stupid as it gets. There is hardly ever any combo deals that fall. Tired of seeing the same level for days on end. Could also make it easier to get power ups. This goes for the soda version as well. The King group of games seem to be stuck on go no where after a certain point unless you break out your wallet.

Addictive, but glitchy lately. You seem to deal with them more the further you progress in the game. I'm on one of the 3300-level puzzles. I spent days on a hard level, only for the game to crash after I pressed the skip button upon finally solving the puzzle. Its done this a few times with previous 3000-level puzzles. And the most annoying thing is that you don't get credit for finishing the level prior to the game crashing. So you have to play it over again even after purchasing boosters.

Great fun; super addictive! Still a great way to distract yourself from something like the long wait at the DMV. ha! Still love it even after a year of playing. Still love this game; even after years of playing. I feel like it used to be harder but it's still a good way to waste time. I appreciate all the video options to gain boosters. Looks they did another update a d made the levels a little harder. Welcome the challenge. Took a break but now I'm back and still love it.

really love the game but not enough rewards to keep going. Spent about 100 bucks and only on level 206. After this purchase is gone, will have to uninstall. Maybe they could improve it by showing what you have available. Finally had to uninstall. Game is really fun but trying to figure out what is required to advance did me in. Got all the way into the 600s but unable to destroy "wrapped candy's in order to go on. Spent waaay too much!!

I know what they're doing, every once in a while they'll cheat you out of a strategic move, like the 4 in a row power stripe one.. you think you just weren't playing attention but it was there! In order to hinder your success in goes out of its way and blatenly robs you as to make sure you end up paying to win. I get it, it's a game that like any others will try to get you to pay up. That's fine but swapping my obvious moves midgame, is cheap and as low as it gets.

fun and addictive i like the new changes with every new version as well as new features. I also like how often updates are made for the game and also the graphical changes. It's more refined now. More events should be added. Also the points should have more meaning like the team points do. Its too easy to just not care about how many points you get per level.

A lot of fun but the newer puzzles dont have enough moves to win. I don't like the changes made to friends. I don't want to sign up to make more friends. I'd like to see more moves to harder puzles. I hate that you know longer can watch a video to get 5 more movies. Also the hard won boosters dont do what they were used for to win the puzzle. Strange that it seems the game is designed to have players spend money on boosters.

Hope not much has changed, I've really like this app it appears the app hasn't changed much really like this game.its still relaxing and fun. I got disconnected by accident , but still get frustrated with the frog, really no explanation of how to eliminate the frog, on an episode. Till later. Having a lot of fun, there's been some changes for the better. Have fun, good luck and enjoy.

At first, the game is good and fairly easy. But eventually, you'll want to find another candy crush game because this one is a rip off. Everything costs money with no chance of watching an ad to get extra stuff like the other games have, you get stuck on levels for days or even weeks and they want you to buy everything just to beat it. When you weigh all the options, it's not worth it. Better off finding another game with another company. They need to improve the game and the choices asap.

Used to be great, but now it's TRASH! I used to purchase boosters from time to time, but now any time I try to purchase, it gives me an error saying "something must be wrong on our end," then it cancels the transaction. It started happening about 2 months ago, after I made a purchase and didn't get the boosters I purchased. Now I can't purchase anything. I thought it was temporary glitch that would eventually self correct, but that is sadly not the case. I'm about to delete the app.

I love Candy Crush so addictive. However, I've had problems twice I need a selected booster and I didn't get my gold bars. Bomber. Also, after I've won an episode it took 3 different levels before my the game allowed me to claim . Just a few glitches that need attention. I'd love to let someone know immediately when this happens. Overall, these issues haven't deterred me from playing and giving the game 5 stars.

Been casually playing this game for several years now. They've added new rewards and incentives for the newer players but really nothing for those of us who have been around for years. Some levels seem to only allow you the moves to win after failing several times with the game asking you to buy something from them to help you pass the level. They also added a feature telling you how many other players have bought extra moves to complete those levels.

If you're thinking of downloading this game, don't. I've been playing for several years, and it has gotten progressively worse about needing to pay to win. I only play as a time killer and have never paid a penny. I used to get stuck on a level, but now even the basic hard levels are almost impossible. Every update is worse and worse for the player. They don't just add levels. They also reduce rewards. This is the only game on my phone and I regret getting it!!

It's a fun,relaxing game that speaks to my sense of order and need to organize. The drawbacks are that after a certain level the game becomes competitive, even if it's just against yourself! Most of the levels require boosters to beat which you can win free but the temptation is there to buy. If you don't want to spend real money on a game then resign yourself to win the levels without boosters. Over all addictive and entertaining.