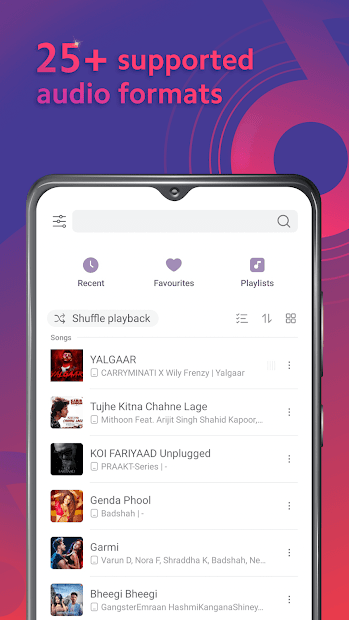 We update our app regularly to make your Mi Music experience better. We've polished a few things, fixed bugs, and made some performance improvements.

Mi Music – Free and unlimited Music app!
Get unlimited access to millions of music, curated playlists, and content from your favorite artists. This is the music app for you to listen to online and offline music. What’s more? Hit music for free!!

Listen Unlimited! Kinds of music are all at Mi Music
Popular music, New songs, Live music, Classic, Jazz, Heavy Metal, Kpop, and more, whatever you want to listen to are at Mi Music. Tons of songs are waiting for you to play!

Main features of Mi Music:
• Find streaming, hit music and play songs
• Play any mp3, song, and music online and offline
• My own music does matter: create and listen to your own playlists

Was a good app, but every single update somehow manages to screw up the UI more than the previous one 1. At least bring back the alphabet on the right side of the screen when you sort by song title! I have 1400 tracks so scrolling is CLEARLY not an option 2. After an update, it just skips some songs, but if you go back, it plays just fine 3. Album covers take a bit to load. That's fine, if it didn't flash white while it's loading. Not exactly easy on the eyes, is it? At least make the flash dark

it used to be a pretty good music app but the newest update made my opinion change. the interface is inconvenient at best and unusable at worst. removed the option to go down the list alphabetically so now if im in A and I want a song with S I need to scroll aaaall the way down, you don't see the problem with that? also sometimes the time bugs out and instead of showing 3:45 as the length it'll show something like 2574.13. it fixes when you pause and play the song again but still, this isn't new

App was just about fine, not a lot intrusive and without too many ads. Mostly when you're not playing the music. Now since the last update the app starts with online content and you can't even choose whether you'd like it to start like that or with local music. And I can't even bother typing about the ads jumping in while you're playing the music. FFS, I want to listen to music from MY PHONE, I don't want any interruption at all!

A LOT OF BUGS. Scrolling is not that smooth anymore, the alphabetized songs where gone, most played songs were gone, the interface is quiet confusing too. All of these came after there updates. If you were still using the old version of Mi Music, better stay on that, and do not update to their latest version.

Really amazing app! It has a simple UI which made it easy to use. Although there's one inconvenient feature, you have to scroll way back up to see your playlist. Hope to improve this part ^^) Edit: It's great that you guys updated about the problem above but, now the A-# on the side is gone and it's hard to scroll down to find the specific song since I have 400+ songs, Hope you bring that back. Thanks!

It was a great music player BEFORE THE LAST UPDATES. It's just lagging and the alphabet bar is gone for songs part. Bro I have 1389 songs! I have to scroll down to get to the "Z"? Can you just tell me what happened to sorting songs by the number of times played? It shows the songs from z to a and then this is sorting by number of times played? I really loved this app but now it's just a trash. I prefer to use older versions but the point is there's no way to uninstall updates. Fix it, please!!!

Alphabet Bar on the right side was very much useful to jump to that specific letter in the list under 'Songs' in 'Imported' tab. Thumbnail / Music Art is flickering after stopping the scroling somewhere. The view of the list has become much shorter because of all those Tabs, Online, Imported horizontal segments. Hoping a redesigned cluster free UI.

Very bad updates. They removed the best feature which was the alphabetical ordering of the tracks. I have thousands of tracks and I can't keep endlessly scrolling to find the song I'm looking for. In addition to the music player freezing from time to time after the recent updates.

Love it! It's an absolute pleasure to use. Only issue I have is the last update removed the alphabet slider in the song section. I have almost 1,000 songs so scrolling through hundreds of songs is a pain unless I use search. The alphabet slider was super useful because it let me jump to anywhere instantly where a song started with A or G. Please bring it back for the song section :)

It's an incredible app I've been using it ever since I bought this phone and it works perfectly! There are no adds and I can listen offline as well which is something I really appreciate and love! However, could you please make a feature where we could download songs from the new online section to listen to offline? I've been wanting to download songs but I wasn't able to. I'd really appreciate that and it would make it a whole lot better! Thank you :)

i loved this app bc it lets me listen to music and it's interface was really nice and good to look at and navigate through. but with the recent update i dont like how dark mode became lighter as well as the removal of the alphabetized scrolling in the song section, it irks me because i have many songs downloaded and it takes a lot longer to scroll and find the song i want to listen to. please put it back.

Help!!! Urgent! I'm a music teacher and yesterday my phone automatically updated the app and minutes later all my music is gone. What the heck !! Music I have been using for years that got from other music teachers that you can not find in the internet. I'm seriously collapsing over here trying to recover it. About the app: you can make carpets and choose the order of the songs, also has a fine search bar. It has so many ads between the songs but you can use the app offline and get rid of them

New update has a lot of bugs. It suddenly jitters when scrolling through your music library. It's not as smooth as the older version. Also, removing the alphabetical navigation bar from the right side was a big downside since you can't easily find the songs you want, especially for users who doesn't like to use the search bar since the songs loops when isolated. Bad update to be honest

Great app once you disable online content, ads and recommendations on startup. I like it and use it a lot to play my LOCAL MUSIC, i write that in capital because I don't use the online part. That being said, I like it because it came with my phone and honestly it sounds OK, it's simple to use and it doesn't use much battery. That being said, I haven't tried any other music player apps so... Keep that in mind.

The recent update made the app basically useless, I have a large music library with over 1750 songs,. Now scrolling through albums stutters and takes me back to the top of the album list. I don't like the new interface, the old tiled album list was way much better. May you please add the ability to add music ID3 tags, editing the album in the app only updates info in the app, it doesn't add the ID3 tags.

This app came with my new phone, It's design is pretty slick and it's fast. But I have a couple of complaints; 1- Albums are on repeat, I can't find the option to disable it. 2- The crossfading between songs kills the transitions in songs that are meant to play after each other (yeah, albums again), having the option to disable that would be nice.

I've been using this app for years now and I really loved it, This app let me listen to the songs I love without any problems. Yes there are a lot of adds but I didn't really mind that much. Until now, suddenly I can't play the songs anymore. Everytime I press the song I want to play, it loads but it doesn't play! It only pops up in the screen (Could not locate requested media) I pressed all my songs but none of them play anymore. It's just this annoying popup that shows up every time.

The concept is great, but the execution is poor... I can't set a playlist cover, it just keeps the song's album cover as the playlist cover, and that's annoying (also I prefer the old style lyrics playback). The lyrics in some cases are shown double, and the app is generally quite buggy... Please try and make something about it. I really like this player and I don't want to change it, but I am forced to 😕

Unlike other apps that have a bunch of ads and don't let you turn off the screen when you listen to music online and don't show downloaded songs, this one is amazing......... although it does have some ads......but like very few. However, a week ago.....it stoopex showing me online content and only showed me pre downloaded songs in my device. I tried sending feedback but did not get a reply. Please fix this.

Is there anyway to make things more simpler by simply giving us more customizations such as a switch for spinning album(track) on the "quick control bar (below)" or even dark mode. Hopefully this app will get improved over time, I've got high expectations for this app, as it is a default music player for redmi/xiaomi phones. *Edit* Album covers sometimes get mixed up because it has 2 or 3 musics with the same name.