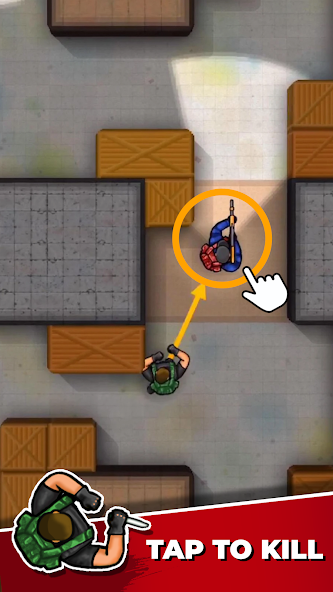 Control the assassin and hunt down your targets one by one. Use your surroundings and shadows to stay hidden from flashlights.

Targets with automatic machine guns can be lurking around each corner. Attack them swiftly and escape without being spotted.

Can you unlock the fastest assassin?

VIP Membership offers a weekly subscription, you will have a 3-days FREE trial period, after this period you will be charged $7.99. After buying the subscription, you will unlock the following features: Ninja Assassin character, all ads removing, 5000 gems and permanent +100% level gem earning. This is an Auto-renewable subscription. The subscription is renewed unless you turn it off 24 hours before the period ends. Your account will be charged for renewal as well. Payment will be charged to iTunes Account at confirmation of purchase. The account will be charged for renewal within 24-hours prior to the end of the current period, and identify the cost of the renewal. Subscriptions may be managed by the user and auto-renewal may be turned off by going to the user’s Account Settings after purchase. Any unused portion of a free trial period, if offered, will be forfeited when the user purchases a subscription to that publication, where applicable.

For more information, check the links below:

The prices are set for United States customers. Pricing in other countries may vary and actual charges may be converted to your local currency.

Contacting Us
If there are any questions regarding these terms, you may contact us using the information below.

Way too many ads, you get more ads than game time. Let players go through a couple stages then play an ad, but it takes 5 seconds to finish a stage and you need to wait 30 seconds for an ad. Played 2 stages and it got annoying, give ads for a small reward instead on an ad every 5 seconds, uninstalling

Too many ads... As always!! Google needs to help us control the ads limit for these games! I don't care if they are "free to play." In the end you still pay due to the forced ads having too much freedom in these games. Too many times do we see illicit or even sexually suggestive/explicit ads go unchecked even though they are flagged. Game developers that allow such ads are complicit and constitutes guilt on their part and make them an accomplice to the acts since they deal and are paid by them!

u learn how to strive, when to attack and when to give up.... it's deals with life.... becoming a strong person doesn't start in a day we strive towards it....we attack it squarely... even though we give up sometimes... the future reward we not let us.. it's also deals about the game.. the more powerful people will want to unlock gives us the hope of getting the keys and the small quantity of diamond.... it's interesting... it's fun...to me no side effects...💓💯😁😁😄😄

10 second play, 40 seconds ad and forced clicking to play store by providing tiny or discreet x signs. PLUS, no real challenge in the game !! Uninstalling

This is a really great game,but the reason I rated the game three stars is because they are too much ads.The first eight levels of the game they're up to TEN ads.

they slap you with ads at the slightest pause or play and at the slightest opportunity ...asides that addictive,good to break the boredom but over time becomes boring because there are no new grounds and challenges, same pattern for kill always and number of soldiers(targets) increases as level

to many ads. I understand it's a free game and you gotta pay the bills somehow, but the amount of ads and time away is a little much. kinda greedy if you ask me.

The worst game experience. The game play is average, but it loads Ads after every game. It's very irritating to play.

I am gonna give 4 stars because it's amazing no complaints but a small problem that is.. It take long time fill the diamonds to get new person that's the only problem in that now I am playing 236 th level since 7 months I am playing it.... I reccomend this app definitely you may like it

This was a really good game, and still is, but I would really like of you would add a variety of enemies with different points that make them stronger then one another as the levels go up, the game also has too many ads now,I played this a few years back and I used to love it but now I can't even enjoy since there's always an add every time I play and it's really irritating,the funny part is that you have kept prizes for watching ads but the sheer amount of ads normally within the game is alot.

Ad machine. You can literally progress the game entirely by watching ads. Even if you don't do that gameplay only makes up at most a twentieth of your time. Not fun unless you really really like ads, in which case I'd suggest an app that pays you for it in money.

Too many ads it forces you to view them. Pretty wack when I'm trying to select a button but doesn't work. This game is poorly made the UI is bad. The game is simple overall. Don't waste your time on this honestly.

was watching mandatory ads within 60 seconds of opening the game. gameplay seems very basic from initially playing. Edit after playing 102 levels: gameplay depth does not increase. Upgrades/quests do not change how you play in any way. Doing certain menu commands can give a pop up ad. The only way this game is playable is by restarting the app every time an ad plays

My friend had downloaded this game without me knowing, but I kept the game and starting playing it. Basic concept, but I find it very enjoyable. Though, I will admit it has alot of ads. But my main issue is that it had started glitching for me. A green screen would pop out alot making me not able to see buttons, and the background of the game would be white and annoying. This game has lots of potential, just please fix the bugs and keep up the good work!

I'll start with the good review. I love the game so much. It is fun and very addictive. Bad: To unlock players costs so much diamonds even though each level only gives very small diamonds, there isnt much weapons apart from a knife, you can die easily, you cant break the shield of the red ones and the ads dont work. When i unlock boxes with the keys, im always given from 25-100 diamonds only. I havent unlocked any other thing with the keys. The quests are just on repeat and its getting boring.

The game itself is ok, but there are ads just navigating back from the freaking CHARACTER SELECTION MENU! Not to mention ads after every level attempt, and the inability to bring up the system buttons (like to switch apps) without the phone acting like it thinks you clicked on the ad. If I'm trying to close your game to avoid the ad, do you really think opening Google Play will stop me? All it does is piss me off!