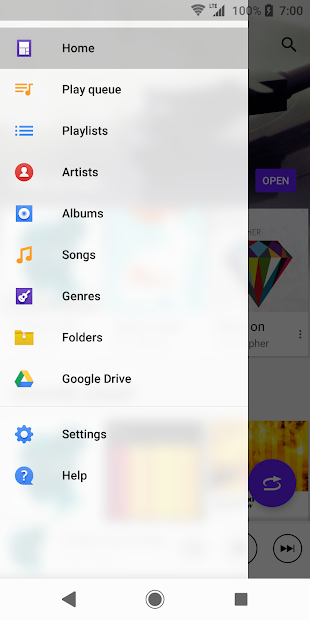 The Music application from Sony makes listening to your music files a wonderful experience. Import your music, arrange in playlists and just listen and enjoy. We optimize the sound and restrict the power used, so you can listen for as long as you want.

The Music application is only compatible with Xperia devices.

I just think that every update makes this app worse. I got a xperia Z2 first phone back when I really wanted it for the D.NC and SenseMe. Now the NC is still there but SenseMe is gone and just playing music itself is just kind of bad. Keeps doing this random half-second stops while playing music and I'm on my XZ1 now. It happens both wired and wireless.

It is a good Music Player. However some songs get misplaced in the "Unknown Artist" folder, despite having the correct info from the PC. Even if you redo the song info on the phone, they get put in a different folder that looks identical to the original.

Loved it to begin with and then some genius decided a volume control that takes away the ability to increase the sound levels had to be introduced. How they arbitrarily decided half volume was the threshold is mystifying. With my very nice Grado wired headphones I can't increase the volume to listenable levels while in flight on a commercial airline. The fact you can't disable the limiter is annoying beyond belief. Like a bunch of idiots aka the EU are smart enough to manage anything to stsrt

Multiple problems: 1. I used the "Delete artwork" option to try to fix a song, and now all files old and new cannot load embedded artwork into Android 9's MediaStore. Tried resetting Music app, Media Storage app, and External Storage app, but art still broken. 2. "Album Artist" is not supported correctly. Because of #1, I tried to remove all embedded art and use folder.jpg instead. That works for the Google Play Music app, but not for this Music app, which still has missing album art for some songs in an album with different artists. Albums in this Music app do not display "Album Artist", but rather the artist of the last track in the album.

Not again. More feature deprecation. Dump the metadata support, and then don't explain why my next phone should be an experia. I've kept this phone longer than any other because I love it. You've improved it over the years and the features and performance have been exceptional - beyond expectation. But the trend is distressing. Great stuff is going away, prices are becoming silly, and others are hungry to get our attention. SONY pcs and tablets are gone, and looks like phones are next!

PLEASE SONY FIX THIS!! Breaks on Android 10. Sad. I have owned a lot of Sony phones and I look forward to the next Iteration of this application but now after working perfectly for a year, my new Sony Xperia X3 running Android 9 Just now updated to Android 10 and broke the app. The music Still loads, but all my playlist are coming up blank with no album art. I called Sony and they made me factory reset the phone. But that didn't fix the problem. There's no way to roll it back to Android 9.

I've used this app for years. I loved it. But my old xperia phone was busted, and I can't add album meta data via the app to my current one. This was one of the best features for someone who doesn't stream music. This is weak. Really weak. I have a music collection on CD that I've saved on my hard drive to put on my SD card. I want music apps like we used to have. Is that so hard?

Lost all my album artwork since the last update. Still sounds good, but that was a great feature. Now my music collection looks a mess. Spent hours cleaning it up. Really annoyed me. Now it's pathetic. Looking elsewhere for something else to use now.

The way this app shows folders is in flat mode. Shows all music folders in one messy list and make it very difficult to find your musics in that mess list specially if you have many music folders inside another folders unlike other music player Apps that offer music folders in "hierarchy" mode. Then Sony please add this option to the App because your loyal customers deserve it. Please learn from Betamax/VHS format war that you lost it because you didn't care about your customers real demands.

Folder listing is annoying as hell. Why the f*** would anyone want the app to list every single folder in the entire directory?? That defeats the purpose of having folders in the first place!!! Please, in the next update, allow folders to be navigated just like any computer operating system GUI does. I have 5 main folders with over 250 subfolders and I shouldn't need to flip through all of them, let me click the folder path to the files I've sorted.

With the newest update, paired with upgrading to Android ten, the search function no longer works for music that was in the device before updating. Music added after updating can still be searched for, but there is clearly a need to reset the search cache somehow. Also, removing metadata acquisition was not a smart move. Other than that, this app works perfectly, this latest update seems to provide no benefit whatsoever to users. Edit: It seems as though the search issue was fixed.

You know, I'd appreciate it if the app didn't keep clearing the music metadata (album/track info and album/artist pictures). Of all the updates (pointless, stupid as hell, both, or not), that issue's never been corrected and, well, why not?! I'll change my review when that issue gets fixed.

I was surprised, I hadn't ever used it. Until i recently purchased Amazon HD music and this app automatically added the song from Amazon. The sound quality was great. I will see in three months whether this app will hold my Mp3 songs in it's library when my Amazon subscription expires. This music player has even supported my SD card music files. Thanks guys

I had the same issues with Android 11 as others (not playing music from SD card). What worked for me was disabling the app, clearing user data, removing the SD card. After the phone restarts and placing the SD card in again renabling the app, then having the database build again I was able to play music from my SD card with the album art intact.

Decent music player app. Really wish there was a sort by album artist option since therenare so many multi-artist albums it makes a lot more sense than sorting by artist for certain genres. There is also a bug where non-square album artwork get stretched or contracted to fit into a square on the home screen rather than being trimmed. Also wish there was a view to show all albums with artwork in a large grid. Using on Xperia 1 iii.

Many audio files (m4a) sound choppy, where same files sound completely fine with different players and on my previous phone (Samsung music player). Also support for more audio formats is limited (wma etc.). Otherwise, the player is decent and sounds good with the rest of the files, but it would be great if the above issues are addressed and if you add support to obtain album art covers.

Alright. Sony why? I specifically got an Xperia phone so I'd have an optimized music app that could play my hi res lossless files. And the stock Music app cannot read metadata on .wav, ALL listed "unknown." I had to just resign and convert them all back to .flac format. Not only that but although your app is AAuto compatible when I tap on the artist it shuffles the all artist songs, so please add the ability to see albums after I tap artist! Oh and forget having audio controls & file info...

Hi! I think it would be a great Idea to consider implementing a sorting function into "songs" library, to view tracks by recently added (by date), and such. Sometimes I want to listen to my newly installed tracks and I can only browse alphabetically. Also, for some odd reason, the tracks I'm currently playing are not marked purple like in playlists. Making some software to back up playlists should also be considered, for when I move to another device...the playlists disappear. Thank you!

I think its a much better way to listen to my music than yt music, however It would be improved if we could purchase music from the app as well as listen to mp3 files we downloaded. Since my xperia is capable of dolby atmos, dsee extreme, and 360 audio, I see no reaon we shouldnt be able to buy songs in those formats

I like the app overall. But recently I've noticed that it doesn't take input correctly from google assistant. If I ask google to play a particular song on the "Music" app it by default plays a song that came with the phone. This wasn't the case when I first started using the app. I'd be very happy if Sony gets this issue fixed.