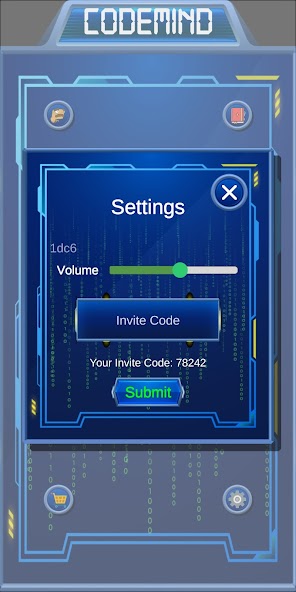 You should be very concentrated and fast to overcome the objectives. This is a puzzle game based on Master Mind game. Solve the riddle to prevent disaster!

About the game:
Mastermind or Master Mind is a code-breaking game for two players.It resembles an earlier pencil and paper game called Bulls and Cows that may date back a century.
The game is played using:

code pegs of 4,6 or 8 different images, which will generate the code.

key pegs, some colored green, some red and some yellow, which will be used to show the hint.

You as he codebreaker try to guess the pattern, in both order and color. Each guess is made by placing a row of code pegs on the decoding board. Once placed, the codemaker provides feedback by placing the hint. A green key peg is placed for each code peg from the guess which is correct in both color and position. An yellow key peg indicates the existence of a correct color code peg placed in the wrong position.

If there are duplicate colors in the guess, they cannot all be awarded a key peg unless they correspond to the same number of duplicate colors in the hidden code. For example, if the hidden code is red-red-blue-blue and the player guesses red-red-red-blue, the codemaker will award two colored key pegs for the two correct reds, nothing for the third red as there is not a third red in the code, and a colored key peg for the blue. No indication is given of the fact that the code also includes a second blue.

Once feedback is provided, another guess is made; guesses and feedback continue to alternate until either the codebreaker guesses correctly, or all rows on the decoding board are full.

There are 2 help methods in the game , the first one removes one of code pegs and the second solves one of generated codes. You can use hints by consuming coins. You can also buy coins or use the rewarded methods to get coins.

This is the most thoughtful and mind blowing app i have ever play with and to be honest, this is the best game boosting your mind that has ever been created so far.
----------
Thanks for your review! Please recommend our app to your friends, and don’t hesitate to shoot us a note at hehappteams@gmail.com if you have any questions.

It's a fun game to play but it's lacking some music when we're playing and not just clock ticking I'll give it a five when music is added
----------
Hi, We've forwarded your feedback to our developers. Thank you for taking out the time to send us your suggestions!