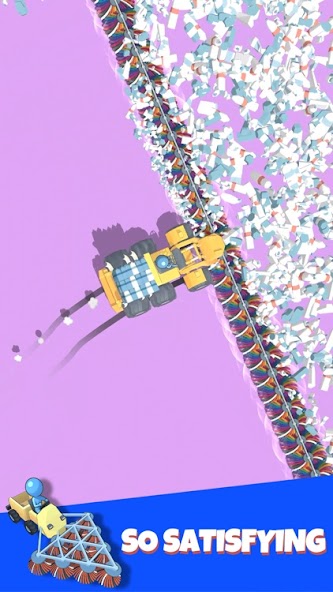 The most satisfying landfill-theme ASMR game where your main goal is to crush the garbage and make millions of dollars from your landfills.
LET’S MAKE A FORTUNE.

Paying to remove the ads, doesn't actually remove the ads. Waste of money for nothing. Game would be better without the constant required ads to advance and upgrade normally. Oh, and 3/4 of the ads freeze before you can get your reward and you end up having to restart the game on top of wasting your time.

Game sends awful bait notifications like "hey cutie I miss you" or "incoming call accept or reject" - a really stupid mechanic to try and get you to come back to the game. Instead of using lame tactics like that they should work on making their game enjoyable.

Fun! Fun!! Fun!!! Only thing I don't like is I think it looks like I'm MAXED OUT on my truck sweepers and I can change anymore and the levels are starting to get repetitive. I don't know if I have to update or anything but it doesn't show one right now. I will let you guys know when I find out.

I would enjoy it more if we're not for so many ads. Also the ads are long. I didn't time it, but it seemed like there was as much ad time as there was game time. I don't know how much longer I'll continue playing.

Just a money grab by the developer. Asks you if you want to watch an ad to increase your earnings but still makes you watch an ad if you select no thanks.

Fun at first but the levels do tend to get pretty repetitive no matter how large they are.

ads upon ads gets frustrating, the game itself is fun. although, the notifications they send is questionable, i got an innapropriate one saying "hi babe💕 i miss you💋" cant say me nor my fiance was very happy about that coming from a landfill game.

Just adds even when you say "no i dont want to see an add for a reward" Just plqying the game it will kick you out and make you watch an add... Add, add, add nothing but adds

Initially, the gameplay was very enjoyable. But they only have about 20 maps that just repeat, and don't get any larger. So 65 levels in and it takes less than 30 seconds to clear a level. They increase the power needed for the trash as you get to higher levels, but that's all. The area of a map should be increasing every 10 levels or so.

No intrusive ads. Got totally repetitive early on. The addition of new, larger areas would be a definite plus. Until new content becomes available I can only give three st8.

Notification came through to play the game again. The Notification read Hi babe ❤ I miss you 💋 Now for anyone that gets this as a Notification and has a partner, can you imagine the arguments this could cause? Absolute disgrace! Notification should read, come back and play the game or something similar. That Notification was uncalled for. Screenshot taken but can't upload here. Also too many adds! Game is deleted!

No warning on an ad popping up, and a delay in moving my vehicles or person. You need to put a countdown on the ad pop up and number two and fix the delay problem

Love the game it's good fun, but and it's a big but, is the adverts, there's loads of them. Plus how do you get on to other games you play same ones over and over and over again it's getting boring

Gets boring very quickly. Same handful of maps over and over, no bigger or different stuff. Never get the huge sweeper you see in the ad. Disappointing.

Way too many ads. I wanted to like this game, but literally every 30 seconds or so, random ads pop up. Most of the ads won't even allow you to quick edit them and even more will force open the store when you click to choose the ad. Don't waste your time with this one. I can't even call it a game. It's just an ad machine.

What a delicious Little Time waster. 🙂👌 Bouncing gameplay and simplicity this game not only catches your attention but it keeps it with its repetitive yet enjoyable gameplay. The more you collect the more you upgrade simple as that really. And progressing isn't too difficult either well done developers keep up the good work I'm really liking this game.

I really like the game but the reason I give it 2 stars is because befor the Aug 19 update you could play the game offline, but now you need a internet connection to play and I HATE IT. Also every time you finish an island you go to the furthest island you have. For instance, if you have completed 10 island you would constantly be shown the 11th island even is you returned to the first. Please fix it!

I really liked this game. I downloaded it n got hooked. The next day when i went to play there was all these ads. Not like at the end of a level but like 2 or 3 ads while youre on a level. That just ruins the whole game. 2 stars isnt what this game deserves but with ads popping up during play anymore would be wrong

Could be a decent game if it wasn't ad ridden. You get 5 starts minus a star per forced 5 second ad that I had in 1 level. Yep. Three forced ads on a single 1-2 minute level. Steer away from this until they remove the large amount of forced ads. And since companies like this never listen to their customers, I don't expect this game to last too long. These types of games just pop up, screw you with ads, then disappear into obscurity.