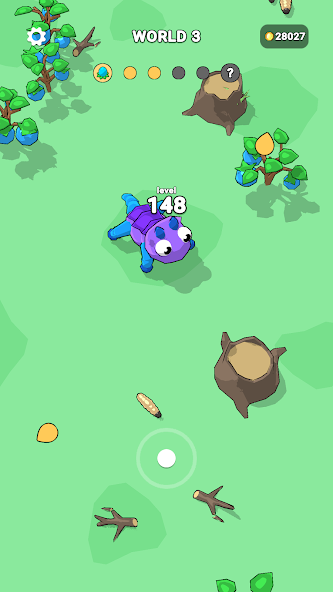 The game is eat then grow cliche, while unlocking new stages and creature to play as. Not so bad, I won't rate it this bad if not for aggressive ads, that plays whenever it wants to —distracting the gameplay without even giving a minute to game without any distractions.

this game is suck! too many of automatic ads! and you will not enjoy it. becouse it automatic go to app ads loke that

Another not completely terrible game that is absolutely ruined by being 50 percent ads. Usually these games are an ad after every single level. Thats already too much. But this game has those plus more ads during the level.

This had the potential to be a good game. But when you throw as many ads at the players as this it isnt fun at all. Im getting 3-4 ads IN THE MIDDLE OF THE LEVEL! Got a few during the boss fights. Thats ridiculous. Yall are too thirsty bruh. Greed is ugly af. So your game is pretty hidious.

The game seems fun at first but ads kept popping up mid game which is jarring and disjointing. I can understand between rounds, but mid game is terrible and ruins the game. It left such a sour taste getting interupted so much I uninstalled after just 3 rounds. Could be a lot of fun, but we won't know until the ads wait long enough to allow play.

Game is not bad. Too much Ads in one game. I dont mind to pay for game but too much ads are so annoying. So i uninstalled the game.

The first few rounds are good fun. After that, the ADS steamroll you so hard MID-MATCH that it quickly becomes difficult to even use the game. After every ad, your movement gets locked in whatever direction you were moving. Uninstalling.

Developer listens to reviews. They made it more balanced. But the game still needs more features and stuff to do.
----------
Please check the updated version, we fixed the balance and added more content.

The enemies are wayyy too fast. No matter what level you are, or how many coins you have, your speed can't increase. It's really annoying since the enemies are way faster then you. If they have a higher level then you, you're basically dead. Also not to mention the tsunami of ads. There are way too many ads that makes gameplay almost impossible. 1 ⭐️
----------
Please check the updated version, we fixed the balance and added more content.

Short, terrible, and filled with ads. Not worth the time.

Forced ad every time you end a level, which could be every 2 minutes

Making the enemy faster than you no matter what is why this game is nothing but a one star experience. Edit: the longer I play this the more clear it is that the experience is purposely bad to make you watch ads even though there are too many to begin with. Terrible game. Would not recommend.
----------
Please check the updated version, we fixed the balance and added more content.

Just ads, say no to an ad you will still get an ad, randomly plays an unskippable ad as you're in the middle of a level, could've been a fun idea.

The ads are unbearable every 3 or 4 seconds of gameplay is an advert. Game is quite good just can't play it unfortunately.

What the hell is wrong with opponent bot speeds!!? I was so confused for straight 5 minutes as to how can I increase my speed because no matter the level or damage, if there's a high level behind you we're doomed.
----------
Please check the updated version, we fixed the balance and added more content.

I give this game a one star the reason why is it's NPCs no matter what level you are they're always faster then you. Second even when you have an NPC the same level as you you try to attack it you bounce off but the second your back is turned it attacks you and kills you and you could do the exact same thing and it bounces off. Third what is with all these damn commercials I can understand a commercial at the end of the stage but not every NPC well in battle!
----------
Please check the updated version, we fixed the balance and added more content.

It's a great concept and is pretty well done, however it could use some more body parts and locations as going back and forth between the same things can be boring after a while. But I still love it overall
----------
Please check the updated version, we fixed the balance and added more content.