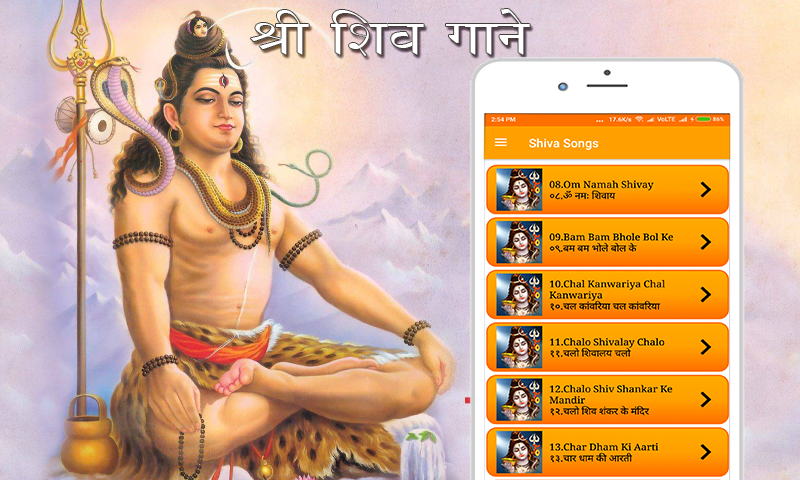 Most Universal Application for Lord Shivaa.
Shiva Songs completes the worship or prayers made to the God. It is believed that Songs provides a completion to the puja. This Songs of Lord Shiva is also known Shiva Songs.

Shiva Songs App on your finger tip with nice visual effects and get blessed from Lord Shivaa !!!. Feel temple like ambiance.

Lord Shiva, also known as Mahadeva (Great God), is one of the five primary forms of God in Hinduism. He is depicted as an omniscient Yogi who lives an ascetic life on Mount Kailash, with wife Parvati and his two children, Ganesha and Kartikeya. Shiva is also regarded as the patron god of yoga and arts.

So download it and listen Shiva Songs, Amritwani & Chalisa to invoke divine blessings of Lord Shiva.

🔔 🔔 🔔 KEY FEATURES 🔔 🔔 🔔
🔅 Beautiful collection of Lord Shiva Images and Idols, which changes itself during use of app.
🔅 You can use bell, shankh, hand bell & Aarti lamp.
🔅 You can use marigold, sunflower, rose, dahaliya, white lotus & hibiscus garland (Foolon Ka Haar).
🔅 Smooth transitions & full of animations.
🔅 Set the wallpaper on background simple click on image.
🔅 Continuous update on the present count/repetition of Songs.
🔅 Set the Shiva Songs as Ringtone/Alarm simple click on image.
🔅 Image Switching for 1, 3, 5 or more seconds tap on last button of Image Switching.
🔅 Repeat Shiva Songs for 1, 3, 7, 11 or more times tap on last button of Image Switching.
🔅 Automatic stop and continue music during phone calls.
🔅 Hindi & English Lyrics with auto smooth scrolling on playing Shiva Songs.
🔅 Shiva Songs lyrics in sync mode with the audio on bottom in two lines and auto change.
🔅 Notify user when running in the background.
🔅 You can minimise app easily by minimise button.
🔅 Play/Pause/Stop options available for audio.
🔅 Notification feature available.
🔅 App can be moved to SD Card from device settings.

If you like this app please recommended it to your friend circle.

Thanks in Advance for Downloading….
Rate Us if you like So much.

It is a very good app