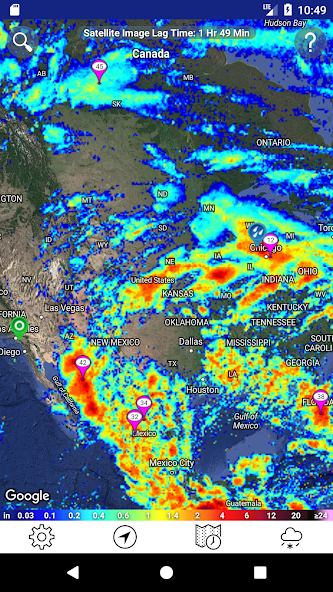 Welcome to the iRain app. The app is licensed to the Center for Hydrometeorology & Remote Sensing (CHRS) at the University of California Irvine (UCI).

iRain provides access to real-time global high-resolution (~4km) satellite precipitation products from the PERSIANN-CCS (Precipitation Estimation from Remotely Sensed Information using the Artificial Neural Networks – Cloud Classification System), which has been developed by the research team at CHRS. The building block of iRain rests on the satellite precipitation estimates generated by the PERSIANN algorithm which has been under development for over two decades. More detailed information about PERSIANN-CCS can be found at http://chrs.web.uci.edu.

iRain allows users to visualize real-time global satellite precipitation observations and track extreme precipitation events globally. Users can also use the crowdsourcing functionality of the app to report their local rainfall information to supplement our data. A useful feature of iRain is that real-time rainfall observation data can be easily shared through social networks i.e. Facebook, Twitter.
iRain is available for iOS and Android devices.
The web version of iRain is hosted at:
http://irain.eng.uci.edu.

Acknowledgments:
iRain is the product developed by Dr. Phu Nguyen, Assistant Adjunct Professor in the Center for Hydrometeorology and Remote Sensing (CHRS) at UCI and his team, which includes a dedicated group of mostly undergraduate students including David Furman, Phat Huynh, Thanh N. Palacios, Hoang Tran, and April Huie.

Financial support of the following agencies is acknowledged:

– NASA funding resulted in the development of the PERSIANN algorithm and several of its variations.
– ICIWaRM of the US Army Corps of Engineers has provided a major part of support for Mr. Dan Braithwaite, Programmer Analyst III at CHRS.
– The US Army Research Office’s support has resulted in additional refinement of the PERSIANN algorithm
– Cooperation with UNESCO’s G-WADI program has been critical to the dissemination of data worldwide.
– NOAA funding through the Climate Data Record (CDR) program resulted in the PERSIANN-CDR dataset.

Special thanks to Hien To, Ph.D. student at USC, for his contribution on the crowdsourcing technologies.

Very good application, but do not work on all android version. This app show you the aqumolative rain in last three days. Using this application beside FLOWX will help you to prevent human life and their assets. By this application you see the past three days rainfall and with FLOWX you cao see the nest week rain fall in specific location. You have time to do action against mother nature. Try it.

It's a great app! Very useful and well made.

On Android device, it simply does not work any more. After deleting the old version and loading latest version , I still get "unable to retrieve data lag time " message, same as before.

Recently, the android version of iRain does not show the accumulated rainfall. Please fix it. I use iRain and FLOWX applications at the same time and prevent the floud damages. It would be great if you combine the ideas of both applications and create a new one. Thank you. Hossein Sefati

Wanted to see history, maybe 14 days or more for trees

This was exaclty what I was looking for shows actual rain fall over what ever period up to 72 hours from satelite data. I wonder if there is a way to look at historical data, would be nice to be able choose dates.

The new updates have the app so easy to use and the interface is beautiful. Storm tracking has never been easier or quite as cool!

Worthless. Why would LA Times report about this? Was it a fake article or was the reporter just not able to come up with anything else to write about?

Not working
----------
We are very sorry for this problem. Please update the latest version to continue using. Thank you!

Really?! This is what my tax dollars go to in funding the UC system...to build an app that does nothing?! All I get is a gray, blank screen...No map, no information. Major fail! It should be removed and fixed before ever being made available. You pinheads at UC should work on something useful.
----------
We are very sorry for this problem. Please update the latest version to continue using. Thank you!!

Did not work
----------
We are very sorry for this problem. Please update the latest version to continue using. Thank you!

No use at all, nothing works on this app
----------
We are very sorry for this problem. Please update the latest version to continue using. Thank you!

All the permissions it ask for is what is stopping me from using this app.
----------
We are very sorry for this problem. Please update the latest version to continue using. Thank you!