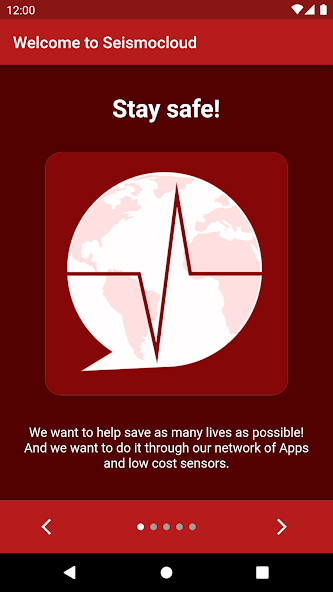 We have completely rewritten the app and fixed a number of bugs!

SeismoCloud is a crowdsourcing project whose aim is to detect earthquakes using smartphones and Internet-of-Things devices as seismometers. In the event of an earthquake, SeismoCloud sends an Early Warning, i.e. an immediate alert, via smartphone notification to the citizens of the provinces involved.

– When your phone is on standby and resting on a table, it turns into an online seismometer.
– Thousands of smartphones like yours will allow you to monitor the entire territory.
– In the event of an earthquake, an immediate alert will be sent to those in areas where damage could occur. (We don’t send alerts yet, we will when we reach a certain number of active apps)
– The alert (it’s a notification) travels faster than the seismic wave, so many will be able to receive it a few seconds or tens of seconds before they feel the earthquake.

The location is needed to locate the vibrations on the map and thus detect potential earthquakes, but, to protect privacy, neither the name of the seismometer, the type of device, nor the precise location are shown on the map.

SeismoCloud is a crowdsourcing project: everyone contributes by simply installing the app. The combination of all the small contributions is a great service for everyone.

SeismoCloud is a scientific research project carried out by researchers of the University La Sapienza of Rome (Department of Informatics) and the Italian National Institute of Geophysics and Volcanology (Seismology and Tectonophysics Section). With everyone’s contribution we are testing the system and we will be ready to send the alarms when we reach a certain number of active apps. Help us to spread the app among your acquaintances.

The app, when the phone or tablet is not in use and is resting on a horizontal surface, uses the internal sensor of the smartphone (accelerometer) to detect vibrations in the surrounding environment, behaving like a real seismometer (i.e. a seismograph without paper and nib, which sends measurements to a central computer) and thus contributing to the detection of earthquakes.

In fact, when many smartphones in the same area detect a vibration at the same time, an algorithm on the central computer compares the data received and makes an estimate of the distance within which the earthquake may pose a danger to the population.

The application has been developed in such a way as to minimize power and bandwidth consumption, while still ensuring constant detection throughout the day.

It should say it's only for Italy, because it's useless elsewhere. I created a node for measuring and connected it, even used my phone for measurement, and it didn't record a 3.5 magnitude earthquake last night. Zero results for anything out of Italy.
----------
Hi! The system is not limited to Italy (although the earthquake list from official sources is currently showing only Italy). We're modifying the way the app is accessing the history of a device, in next few weeks we'll release a new version with some enhancement on this :-)